The IBSF would like to share the following about “Gomer” Malcolm Lloyd, a true legend, written by a former member of Gomers team from Sarajevo.

Without doubt, a truly significant character both in and out of the Army and anyone who came into contact with Gomer would never forget his physical presence, which by any yardstick was immense, his boisterousness and his infectious sense of humour. Born in 1947 in Gorseinon Swansea, he left school to work as a collier in the local coal mine. However, after a spell underground, he decided that it was not for him and joined the Army. He was much taken with the idea of being a tank driver, perhaps his ‘tank like physique’ drawing him in that direction and he enlisted into 1st The Queen’s Dragoon Guards (The Welsh Cavalry) in 1968. After his training in Catterick, he joined the Regiment in Detmold immediately making his mark bolstering the rugby team in his much loved position of tight head prop.

Gomer was a natural athlete, possessed of enormous strength and speed and with an utter disregard for his own safety. He was also a complete ‘admin nightmare’, tales of his apparent inability (read idleness) to complete even the simplest of domestic tasks were legion; like putting his gunnery pamphlets into the washing machine along with his uniform and his penchant for walking around the Squadron living accommodation in his underpants (if he chose to wear them) and socks demanding someone make him a brew. This amusing dysfunctional behaviour sometimes coloured his military affairs too. After neglecting to prepare his mapping for an enormous manoeuvre exercise advancing from Germany to the Netherlands he read his maps one at a time disposing of each one when finished by screwing it up in a ball and throwing it out of the turret. All very well until we had to withdraw along the same route! For hundreds of miles we could hear him on the Troop radio net asking the Troop Corporal where he was and then bluffing it by giving fictional situation reports and ordering the driver to make the tank ‘break down’ conveniently when things got sticky.

Irritating, infuriating and sometimes exasperating, nevertheless there was always something of the naughty and mischievous little boy in Gomer’s character that endeared him to others. His first love was rugby and his ferocious demolition of opposition loose head props was terrifying to behold, there is no doubt he would have played for the Army had destiny not reserved greater laurels for him. As alluded to, Gomer was an absolute physical specimen (God knows how, as his capacity for eating and quaffing beer was legendry), so it came as no surprise that in 1970, in response to an advert on Regimental Orders for individuals to try bobsleighing that Gomer volunteered to give it a go. So began the first chapter of his enduring passion for the “Sport of Princes”.

Bobbing at that time was dominated by the Cresta Run set, mostly rich and privileged Cavalry and Guards Officers whose reckless penchant for throwing themselves down any snow or ice covered hill was legendary. It can only be imagined what they thought when Corporal DM Lloyd turned up at St Moritz to give it a go. Finely chiselled he certainly was not, but his straightforward robust approach and his physical attributes made him the Officers brakeman of choice. So much so that his name was first on the team sheet for the 1972 Winter Olympics at Sapporo Japan. Using his triumph there as a springboard, he produced even greater success at the games in Innsbruck 1976 where QDG provided an all regimental GB sled and further representation in Lake Placid in 1980 (no one at regimental duty at that time will forget the sight of Gomer and his athletic cohort pushing a bobsleigh on shopping trolley wheels around the parade square for hours on end).
During this decade of remarkable sporting success, Gomer’s military career had also gone well. Steadily rising up the ranks he completed three tours of Northern Ireland, became a Gunnery Instructor and completed all the necessary courses for promotion; except of course for his famed and miserable attempts to pass the maths test for promotion to Sergeant, something that led to him being the butt of much joking and hilarity. However, only to a point, being chased around the block by an incensed Gomer is something that those who were invariably caught will never forget! He finally passed and progressed, but in 1981 whilst QDG were posted to Omagh and on the cusp of a Squadron Quarter Master Sergeant appointment, he was at a career cross roads. He had to choose between bobbing and the Army. Bobbing won and he left to continue his sporting career. He represented GB one last time at Sarajevo in 1984 as a civilian but still proudly displaying the Hapsburg Eagle prominently on the sled and equipment. This was Gomer’s last Olympics as a competitor and so began his career as a coach.

He coached the Canadian, Monaco (becoming a personal friend to Prince Albert II), Italian, British; Russian and Korean teams at an astonishing further eight Olympic Games! He strode the bobsleigh tracks of the world like a colossus. Everyone from the great and good to the lowly ice track worker knew Gomer Lloyd; his name was synonymous with the sport and he literally became a one man institution. One thing is certain however, in all his subsequent success he never forgot his roots, He was a Taff and a QDG through and through and everyone of any creed, colour or caste who crossed his path was left in no uncertain terms of that fact.
It’s an oft used cliché these days to describe someone as a legend, but there is little doubt that within the world of bobsleighing, Gomer Lloyd thoroughly deserves that title. He touched, mentored and influenced the lives of many and once met, he was never forgotten. His untimely death has generated an amazing response from all corners of the world and numerous media outlets including the BBC have featured his story. It comes as no surprise; we may see his like again but somehow I doubt it’ll be soon.

To Jeannie and his family we extend our deepest sympathy. 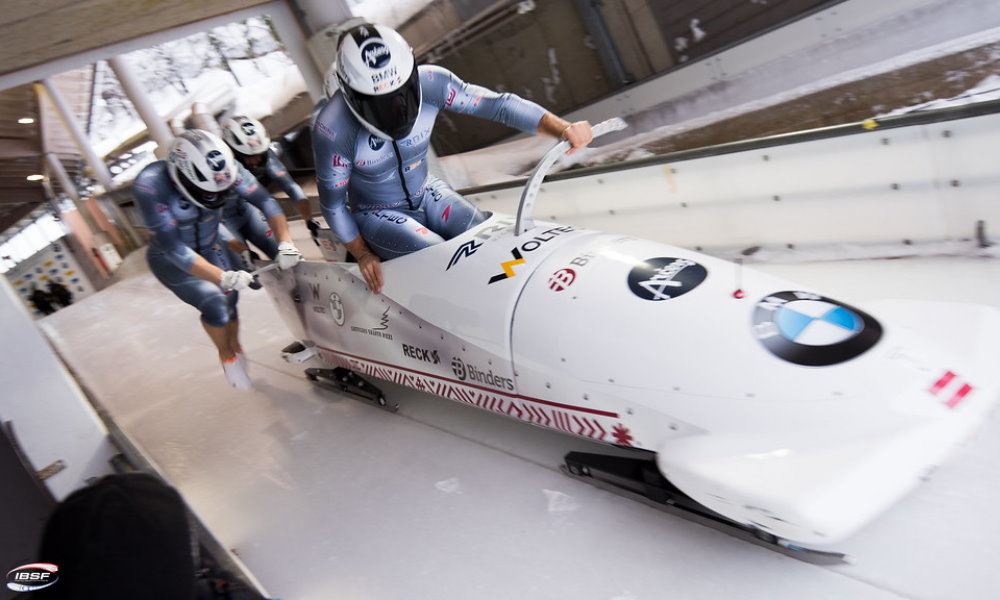