Whistler (RWH)  For the first time in over three years, the athletes belonging to the International Bobsleigh & Skeleton Federation IBSF will be racing for points in the Whistler Sliding Centre, when the BMW IBSF World Cup Bob + Skeleton 2015/2016 goes into its sixth round on the ice track that hosted the 2010 Olympic Winter Games in Vancouver (CAN).

The spotlight in the only Canadian edition of the World Cup this winter is on the athletes from the host country, and particularly on two-time Olympic Champion (2010 and 2014) and World Champion (2012 and 2013) Kaillie Humphries. The 30-year-old bobsleigh pilot comes to her home track as the leader of the overall World Cup rankings, having made it into the top three in all five races to date in the BMW IBSF World Cup 2015/2016, with wins in Altenberg (GER), Königssee (GER) and Park City (USA). Another bobsledder to make a podium appearance in every race so far this season is Jamie Greubel Poser from the USA. The 2014 Olympic bronze medallist won in Winterberg (GER) and Lake Placid (USA), and came third three times, including a tie in Altenberg with Christina Hengster of Austria, who is third in the overall standings. Hengster is currently racing the best season of her career, and has high hopes of the BMW IBSF World Championships 2016 on home ice in Innsbruck. After the first Wold Cup run in Park City, she was in the lead for the first time ever. But she was overtaken by Olympic Champion Kaillie Humphries in the final result, and came a very close second.

The two-man bobsleigh athletes will have two attempts to win points in Whistler Sliding Centre. Justin Kripps of Canada just missed the podium in both Königssee and Lake Placid when he finished fourth, and in Königssee Kripps and his brakeman Alexander Kopacz were only a hundredth of a second behind the third-placed German duo of Nico Walther and Marco Hübenbecker. Currently placed fourth in the overall rankings, Justin Kripps could well move up a step after the race on home ice in Whistler. Fellow Canadian Chris Spring, who came seventh at the Sochi Olympics, has similar hopes: Spring has not yet made it into the top ten in the two-man event this season. As the second half of the season begins, Germany's World Champion in the two-man bobsleigh, Francesco Friedrich, heads the overall standings after three victories in four races. Yunjong Won of Korea is currently in second, and has seen his best ever season so far with three third places. Nico Walther goes into the two-race World Cup in Whistler as overall third in the World Cup standings.

In the women's skeleton, the eyes of Canadian fans will be on Jane Channell and Elisabeth Vathje. 27-year-old Jane Channell, who sadly missed the podium in last year's World Championships and finished fourth behind Vathje, has come in the top seven in all of this winter's World Cup races. She celebrated her first podium in Winterberg (GER) when she finished third, and notched up her best result to date with a second in Park City (USA). Channell comes to her home World Cup in Whistler in third place in the overall rankings. Elisabeth Vathje, the surprise winner of bronze in the World Championships in 2015, is currently overall tenth. Tina Hermann of Germany heads the overall standings after her third victory of the season in Park City, and Youth Olympic Champion and World Championship runner-up Jacqueline Lölling, also of Germany, is overall second.

Canada's local heroes in the men's skeleton, Dave Greszczyszyn and Barrett Martineau are currently ranked eighth and twelfth in the BMW IBSF World Cup. Barrett Martineau celebrated his best ever result in the racing series at the fifth stop in Park City, where he came eighth. The undisputed leader of the discipline is Martins Dukurs of Latvia, who is both defending World Cup titleholder and the winner of the last six winters. Even by Dukurs' standards this has been an outstanding season so far, with five victories in the first five World Cup races. Even the world's best skeleton slider has not had such a successful first half of the season before. ©RWH2015-2016

Whistler (RWH)  The latest news, detailed start lists, race results and a wealth of information about the BMW IBSF Bob + Skeleton World Cup are again available this season via a variety of social media channels. The International Bobsleigh & Skeleton Federation IBSF maintains its own site on Facebook, and all news is posted straight to the profile pages of the over 2,100 members of the IBSF Facebook group and also sent to Twitter followers (@IBSFsliding), of which there are over 2,600.

A live ticker for all World Cup races, as well as results lists showing all race times and overall times and the latest World Cup standings can also be found after every race at ibsf.org. Many countries throughout the world are showing TV coverage of the BMW IBSF World Cup races, and in addition, ibsf.org and the IBSF YouTube channel www.youtube.com/user/bobskeletv are showing all races live with commentary by Martin Haven. The live stream is available in almost every country in the world. ©RWH2015-2016

Pius Meyerhans (SUI) celebrated his World Cup debut for Switzerland in the four-man bobsleigh in Park City – at the age of 48. Pius "Billi" Meyerhans has been active for a long time in the sport of bobsleigh, and has competed in isolated World Cup races for Belgium. A farmer in everyday life, Meyerhans made his first appearance for his home country in the "Bob A-Team", thus named after a popular 1980s TV series because of visual similarities. The team is piloted by "Hannibal" Meyerhans and pushed by "Murdock" (Andreas Baumann), "B.A." (Marius Broening) and "Face" (Marcel Dobler). But the marketing-style nicknames are just a front for serious athletes: Marcel Dobler won the 2009 Swiss Championships in the decathlon, Andreas Baumann has several national titles in the sprint disciplines, and Marius Broening won a bronze medal with the German team in the 4x100m relay at the 2010 European Championships and took part in the World Championship finals with the team in 2005. Broening has pushed bobsleighs piloted by Germany's Manuel Machata, who came first in the World Championships, European Championships and the overall World Cup rankings in the four-man event in 2011, and by Johannes Lochner, who won silver in the two-man World Championships. Nikolai Ekimov, the fifth member of the team, also comes to Switzerland from the German bobsleigh camp. The Bob A-Team joined the World Cup after Beat Hefti's team suffered injury: Hefti's brakeman of choice Alex Baumann had to miss the first half of the season, and Hefti, who collected Olympic silver in the two-man bobsleigh in 2014, decided to retire to the IBSF European Cup for part of the season. The A-Team quartet made it into the final run twice at the BMW IBSF World Cup in Park City (USA), leaving five teams behind it in the second race thanks to a sixteenth place. ©RWH2015-2016

Lelde Priedulena (LAT) made it onto the podium for the first time in her career in the IBSF Intercontinental Cup in Innsbruck (AUT) and Königssee (GER) – and she did it four times in succession. In Innsbruck, the 22-year-old was second to Olympic bronze medallist Elena Nikitina of Russia in both races, while Anna Fernstädt of Germany won both ICC races in Königssee, beating Priedulena down to second. Lelde Priedulena missed bringing in the first ever victory in the women's skeleton for Latvia in an IBSF racing series by just 0.04 seconds in the final run. The Latvian athlete, who competes in the IBSF Junior World Championships in Winterberg (GER) the weekend of the Whistler World Cup, has been in luck since the start of the season: she came fifth, sixth and fourth in the first three BMW IBSF World Cup races, and missed her first podium by just four hundredths of a second in Königssee. ©RWH2015-2016

The last World Cup winners in Whistler in December 2012 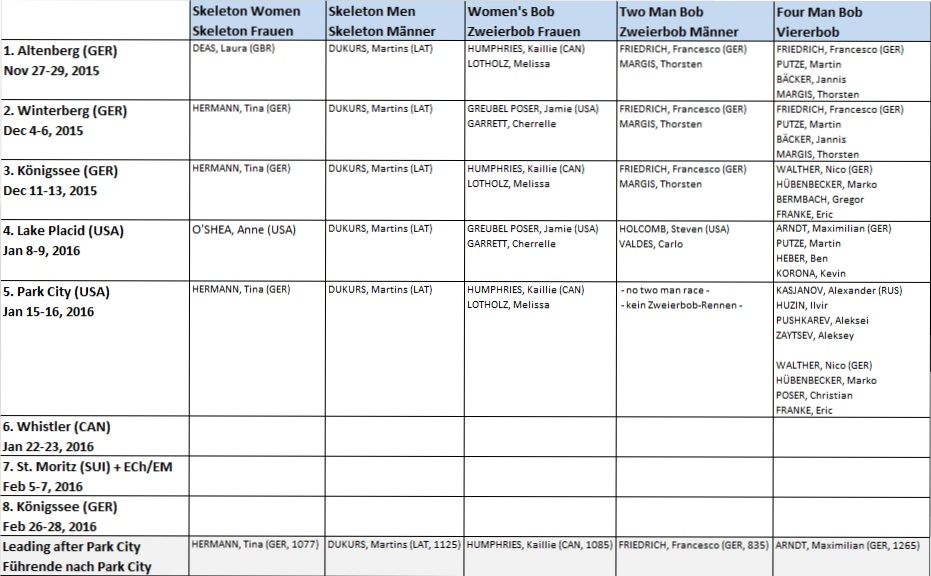