Königssee (RWH)  This weekend, the BMW IBSF World Cup Bob + Skeleton 2015/2016 goes into its eighth and final round in Königssee (GER), a location that has a special place in the history of the International Bobsleigh and Skeleton Federation IBSF, as it is here that the world’s first ever artificial ice track was built.The intricate ice labyrinth was opened in 1968 and has hosted international competitions in the sports of bobsleigh and skeleton every year since then.This weekend the athletes, including the freshly crowned winners of the BMW IBSF World Championships 2016 in Innsbruck (AUT), will be fighting for the last World Cup points of the season.
The bobsleigh events promise particular suspense,with only 58 points separating Olympic Champion Kaillie Humphries of Canada and the current second, Jamie Greubel Poser from the USA.Christina Hengster of Austria is third.Also competing in Königssee are Germany’s World Champion Anja Schneiderheinze and Junior Champion Stephanie Schneider, as well as the 2015 World Champion Elana Meyers Taylor of the USA.
In the men’s two-man bobsleigh, Yunjong Won of Korea currently heads the rankings,just 63 points ahead of second-placed Nico Walther of Germany.The Latvian pilots Ugis Zalims and defending World Cup titleholder Oskars Melbardis will be fighting for third place at the BMW IBSF World Cup in Königssee.The freshly crowned World Champion, Francesco Friedrich of Germany, won the first three World Cup races, but is currently in overall tenth after a break from the sport due to injury.
In the men’s skeleton, it will be hard to beat World Champion Martins Dukurs of Latvia.At the first stop in Königssee this winter, the 31-year-old won his fortieth World Cup. He has come out top in six of the seven World Cup races so far this season, and with a 195-point lead is almost certain to take the overall World Cup title for the seventh time in succession.Currently in second is Sungbin Yun of Korea, who won in St Moritz and tied for second with Olympic Champion Alexander Tretyakov of Russia in the recent World Championships. They are closely followed by Tomass Dukurs of Latvia, who recorded the same time as his brother Martins in St Moritz to earn a joint European Championship gold medal.
There is also a clear favourite for the final race and the overall title in the women’s skeleton at Königssee.Tina Hermann won her first World Championship gold medal last weekend at the BMW IBSF World Championships, and has 172-point lead in the standings before the last of the eight World Cup races. It will be difficult for another athlete to snatch the crystal globe from her.Her teammate Jacqueline Lölling, who was a surprise runner-up at the World Championships last year, is currently second in her first World Cup season ahead of Laura Deas of Great Britain.
In the four-man bobsleigh, Maximilian Arndt of Germany currently heads the field.120 points behind him lies World Championship runner-up Francesco Friedrich, followed by World Championship bronze medallist Rico Peter of Switzerland.Defending World Cup titleholder Oskars Melbardis had to miss three races for health reasons, and will make no impact on the final standings this time round.At the BMW IBSF World Championships, he overtook leader Francesco Friedrich in the last run and collected Latvia’s first ever gold in the discipline.©RWH2015-2016

Königssee (RWH)  The latest news, detailed start lists, race results and a wealth of information about the BMW IBSF Bob + Skeleton World Cup are again available this season via a variety of social media channels.The International Bobsleigh & Skeleton Federation IBSF has its own site on Facebook, and all news is posted straight to the profile pages of the 2,200 members of the IBSF Facebook Group and also sent to Twitter followers (@IBSFsliding), of which there are over 2,700.
A live ticker for all World Cup races, as well as results lists showing all race times and overall times and the latest World Cup standings can also be found at ibsf.org.Many countries throughout the world are showing TV coverage of the BMW IBSF World Cup races,and in addition, ibsf.org and the IBSF YouTube channel http://www.youtube.com/user/bobskeletv are showing all races live with commentary by Martin Haven and John Morgan.The live stream is available in almost every country in the world. ©RWH2015-2016

Ashleigh Fay Pittaway (GBR) will be racing in the BMW IBSF World Cup in Königssee as the new Youth Olympic Champion.The 15-year-old won the gold medal in the women’s skeleton in the second Winter Youth Olympic Games in Lillehammer (NOR) on 19 February.Exactly one week later, she will be the youngest competitor in the World Cup final, and will also be racing her first ever World Cup race.The artificial track in Königssee can almost be seen as home to Ashleigh Fay Pittaway, who was born in Munich to a German mother and a British father, and was initially on the German team.The first ever Youth Olympic Champion in the women’s skeleton will also be competing in Königssee:Jacqueline Lölling came first at the inaugural Youth Games in Innsbruck, and four years later is on course for second in the overall World Cup.©RWH2015-2016

Kaillie Humphries (CAN) won the first ever four-woman bobsleigh exhibition race organised by the International Bobsleigh and Skeleton Federation IBSF.The four-woman bobsleigh test race was held during the BMW IBSF World Championships Bob + Skeleton 2016 in Innsbruck.Pushed by Cynthia Appiah, Kasha Lee and Melissa Lotholz, the winner of the 2010 and 2014 Olympics in the women’s bobsleigh had a 0.76 lead on the second Canadian team comprising Alysia Rissling, Janine McCue, Julia Corrente and Christine de Bruin at the end of the two runs.Maria Constantin, Olivia Vild, Andreea Grecu and Erika Annett Halai of Romania came in 0.83 seconds behind the leaders to take third ahead of the US team piloted by 2015 women’s bobsleigh World Champion Elana Meyers Taylor and her crew of Lauren Gibbs, Terra Evans and Kehri Jones.©RWH2015-2016

The World Cup winners in Königssee in December 2015 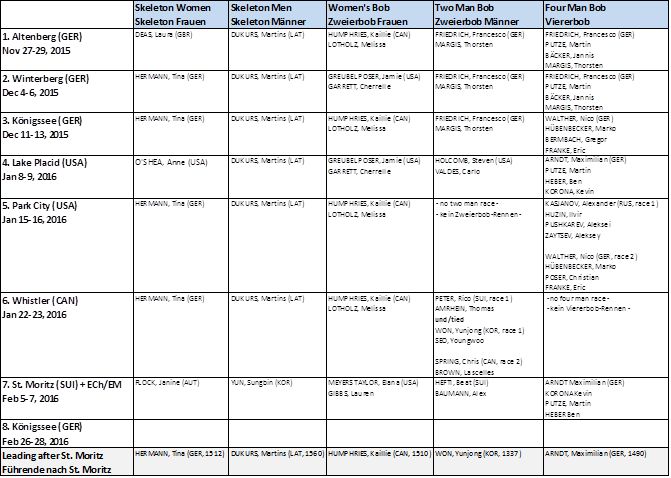