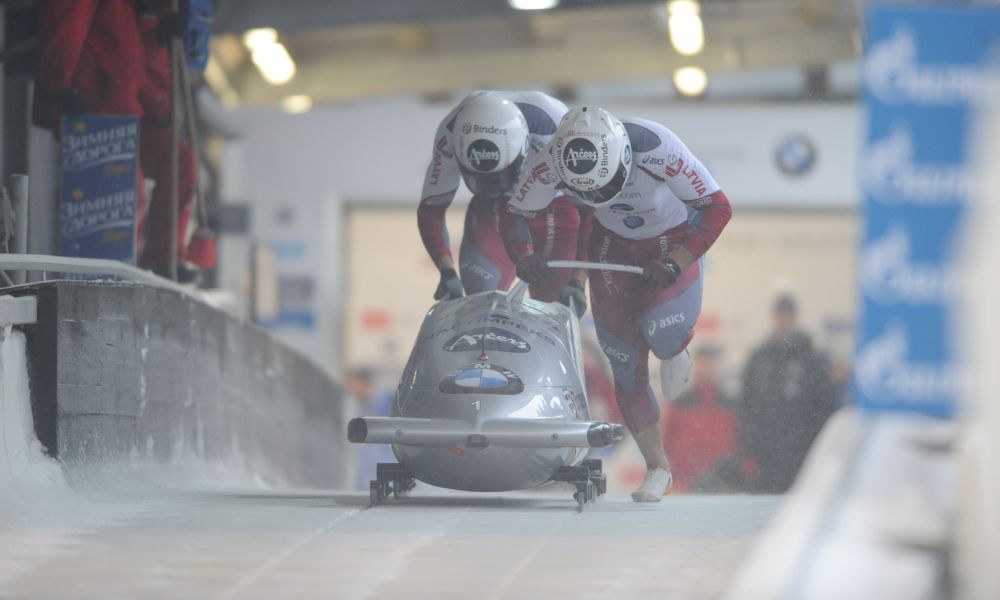 Altenberg (RWH): This weekend (6–8 January 2017), athletes belonging to the International Bobsleigh and Skeleton Federation (IBSF) will be battling it out for World Cup points at the third round of BMW IBSF World Cup in the pre-Olympic season in Altenberg (GER).

Officially opened over 29 years ago, the Altenberg track is the youngest of the four German ice tracks. In November 1987, when the track still belonged to the GDR, two-man and four-man bobsleigh teams from 17 nations competed in the AERO Cup for the first time – in front of a record crowd of 20,000 spectators. The 1413-metre long ice track wends its way round 17 bends through the Erzgebirge mountain range in Saxony. It has been the scene of many IBSF World and European Championships in the course of its history.

In the women’s bobsleigh event in Altenberg, defending World Cup winner Kaillie Humphries of Canada and USA’s Jamie Greubel Poser will start the third race of the season as joint overall leaders. The race will also see the return of European Championship silver medallist, Elfje Willemsen, who came second in Altenberg last year. The Belgian bobsleigh pilot competed in the European Cup at the beginning of the season and will make her World Cup season début in Altenberg.

German fans lining the track can look forward to watching bobsleigh pilots Mariama Jamanka and Christin Senkel, who has been nominated to make her World Cup début behind the steering ropes by German coach Rene Spies. Pilot Stephanie Schneider is set to miss out on the race following a shoulder operation. The European Championship bronze medallist and Junior World Champion hopes to make her comeback next week at the European Championships in Winterberg.

The men’s bobsleigh races in Altenberg will see Oskars Melbardis (LAT) and Beat Hefti (SUI) making their season débuts in the BMW IBSF World Cup. Four-man bobsleigh World Champion Melbardis was forced to undergo surgery on his back last summer and missed the two World Cup events in North America to continue his rehabilitation. Beat Hefti (SUI), the 2014 Olympic silver medallist, won the European Championships and came third in the World Championships for the two-man bobsleigh last season. He competed in this season’s opening race for the IBSF European Cup.

Six different athletes from four countries have finished on the podium in the women’s event while the men’s defending World Cup winner has yet to take one of the top three spots: This is how things currently stand as we enter into the third round of skeleton races in the 2016/2017 BMW IBSF World Cup. Elisabeth Vathje (CAN), Jacqueline Lölling (GER) and Tina Hermann (GER), Janine Flock (AUT), Lizzy Yarnold (GBR) and Mirela Rahneva (CAN) achieved podium finishes in the first two women’s skeleton World Cup races in Whistler (CAN) and Lake Placid (USA). Olympic Champion Lizzy Yarnold of Great Britain is currently leading the World Cup standings.

In the men’s skeleton event, the defending World Cup winner and overall winner from the last seven winter seasons, Martins Dukurs of Latvia, missed out on a place on the podium in the first two races. He finished fourth in Whistler and fifth in Lake Placid. The last time the four-time World Champion missed out on the podium in two consecutive races was back in 2008/2009. Martins Dukurs has remained unbeaten in Altenberg since 2011. ©RWH2017

Media guides - Athletes for both bobsleigh and skeleton for each round of the World Cup: This guide lists all bobsleigh pilots and skeleton athletes due to start at the BMW IBSF World Cup, including a profile with an overview of their results, the latest World Cup standings, and an interesting insight into their backgrounds. The Athletes media guides are updated prior to each World Cup and World Championship event.

All media guides are available under the “Media Contacts” menu on the IBSF website or at http://www.ibsf.org/en/media-contacts. ©RWH2017

Altenberg (RWH): As usual, all the latest news, start lists, race results, lots of photos and videos, and a wealth of information about the BMW IBSF Bobsleigh and Skeleton World Cup will be available on various social media platforms:

The official hashtag for the World Cup is #BMWworldcup

A live ticker for all World Cup races, results lists showing all race times and overall times and the latest World Cup standings can be found on the IBSF website http://www.ibsf.org/de.

Over 40 countries around the world are showing TV coverage of the BMW IBSF World Cup races. You can find a list of our current TV partners at: http://www.ibsf.org/de/sender.

What’s more, NBC (in the USA), CBC (in Canada), www.ibsf.org and the IBSF YouTube channel http://www.youtube.com/user/bobskeletv (available in almost all other countries) also broadcast all races as live streams, with commentary provided by Martin Haven and John Morgan on the IBSF channels. ©RWH2017

Christin Senkel (GER) has made the squad for the German Bobsleigh, Luge, and Skeleton Federation (BSD) at the BMW IBSF World Cup in Altenberg. This will mark the former track athlete’s World Cup début behind the steering ropes. Since she switched to bobsleigh back in 2008, Christin Senkel has acted as a brakewoman for a number of German pilots in the World and European Cups, finishing on the podium on numerous occasions. With Sandra Kiriasis, she only just missed out on an Olympic medal in Vancouver, where they finished in fourth. In 2011, Christin Senkel and her pilot Anja Schneiderheinze received the silver medal in the European Championships. The 29-year-old athlete first took hold of the steering ropes in the monobob event in Königssee in 2011, as she described in a report on kufensport-thueringen.de: “From that point on, I became increasingly set on moving one spot forwards. My time finally came after Sochi 2014.” Christin Senkel’s first appointment as a pilot in the World Cup came as an early Christmas present after three fourth-place finishes in Königssee and Altenberg in the 2016/2017 IBSF European Cup. ©RWH2017

Maria Oshigiri (JPN) has become the first Japanese athlete to win an IBSF race. In November, the 22-year-old athlete and her brakewoman Arisa Kimishima achieved victory in the European Cup in Königssee. In the second race, the pairing once again made it onto the podium, finishing in third. The German coach Hans Wimmer has been training the Japanese bobsleigh athletes since the summer. As pay-off for Maria Oshigiri’s first victory, the coach has nominated her and fellow pilot Minami Homma for the BMW IBSF World Cup in Altenberg. Both athletes have already gained experience on the track: In December, Maria Oshigiri and Minami Homma finished in eighth and ninth at the European Cup in Altenberg. ©RWH2017