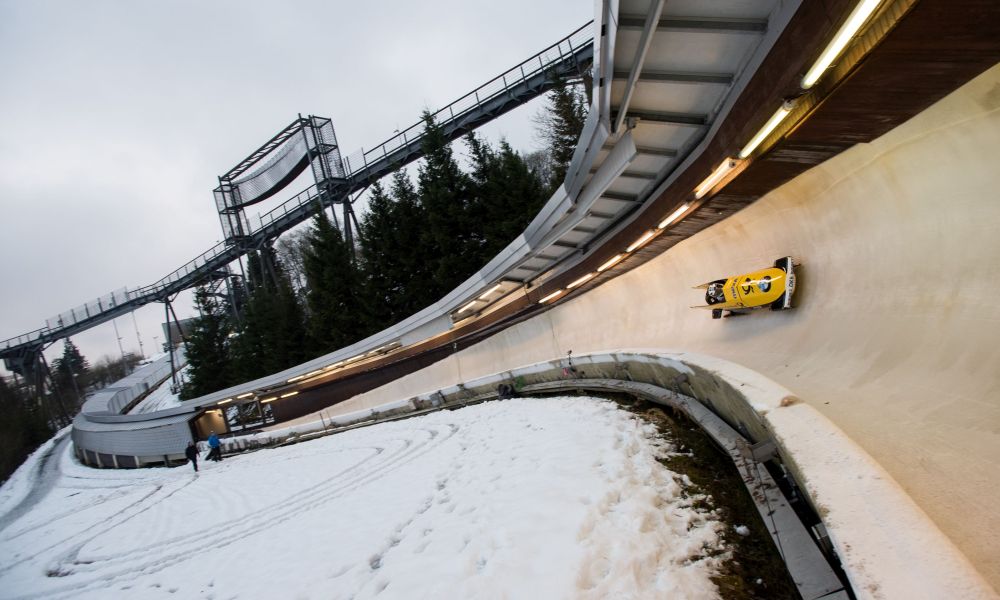 Winterberg ice track celebrates its 40th birthday
Winterberg (RWH): The artificial track on Kappe mountain in Winterberg, Germany, is celebrating its 40th birthday this year. The track opened on 10 December 1977 to become the worlds’ fourth artificially iced track following its predecessors in Königssee, Innsbruck-Igls and Oberhof. On the exactly the same day 40 years later, the BMW IBSF World Cup Bob + Skeleton will be travelling to the track in the Hochsauerland region of Germany next weekend (8–10 December 2017) for its fourth stop of the Olympic season.
The Veltins Ice Arena – as it has been known since October 2015 thanks to the support of Veltins brewery – has played a major role in raising the region’s profile over the past few decades. Thanks to the ice arena, Winterberg and the surrounding region are now famous around the world. It is also an important factor in the area’s economy. When it comes to sports, the arena enjoys a stellar reputation as a venue for major international events, as Bobbahn GmbH announced in a recent press release.
Various factors have meant that a number of structural changes have been made over the years, such as the renovation of the start area (2005/2006) or, more recently, the finish line area and its new functional building (2013). ©RWH2017

Record number of 26 nations sign up for Winterberg
Winterberg (RWH): A record number of 26 nations have signed up athletes to compete in the fourth round of the BMW IBSF World Cup this Olympic season. A total of 23 women’s bobsleigh teams, 33 two-man bobsleigh teams and 30 four-man bobsleigh teams will step up to the starting line in Winterberg. The skeleton events see 34 men and 29 women registered to compete.
Jamaica is entering its first ever female bobsleigh pilot with Jazmine Fenlator-Victorian. The 32-year-old, whose family originates from Jamaica, previously raced for the USA and finished in eleventh place in women’s bobsleigh at the 2014 Olympics in Sochi and third in the overall World Cup in 2015. Jazmine Fenlator-Victorian has been racing for Jamaica in IBSF events since 2016. Before the start of the Olympic season, the International Olympic Committee (IOC) also approved Fenlator-Victorian to represent Jamaica at the Games should she qualify. ©RWH2017

Annika Drazek prepares for season début at home World Cup
Winterberg (RWH): The BMW IBSF World Cup in Winterberg sees brakewoman Annika Drazek registered to compete for the first time this season. The German athlete was the 2016 World Champion with Anja Schneiderheinze and last winter’s European Champion with Mariama Jamanka. In the skeleton event, World Champion and defending World Cup holder Jacqueline Lölling and Alexander Gassner, who finished fifth in the World Championships, will both be appearing in front of their home crowd. Anna Köhler, a newcomer to the World Cup, will be competing in the women’s bobsleigh, representing the local club BSC Winterberg. The German men’s brake squad in the bobsleigh also includes three local heroes in the form of Erline Nolte, Christopher Weber and Jannis Bäcker. ©RWH2017

World Champion Friedrich set to début new Wallner 2-man sled in Winterberg
Winterberg (RWH): The World Champion Francesco Friedrich will be using a new 2-man sled made by the Austrian manufacturers Wallner for his appearance at the BMW IBSF World Cup in Winterberg as reported by the newspaper Dresdner Neuesten Nachrichten. Friedrich, the 2013, 2015, 2016 and 2017 World Champion in the 2-man bobsleigh, gave the sled he was using on loan when he won his 2017 title back to Hannes Wallner at the end of last season. The sled has since been sold to Austria. Racing in another sled at the beginning of this season, Francesco Friedrich finished two times ninth (Lake Placid, USA) and 13th (Whistler, CAN).
According to the report, Johannes Lochner is also set to change his equipment. After finishing in 12th, 6th and 21st, he will be switching back to last season’s 2-man Wallner sled in time for Winterberg. Their team mate Nico Walter and the German women’s bobsleigh team are relying on sleds from the German Institute for Research and Development for Sports Equipment (the FES) in Berlin for the Olympic season. Ahead of Winterberg, Walther, who won the opening race in Lake Placid, is currently third in the overall standings in the 2-man event. European Champion Mariama Jamanka is fourth overall while Stephanie Schneider, third in Lake Placid, is currently ninth. World Cup newcomer Anna Köhler is 11th. ©RWH2017

Bracher to replace Hefti in Winterberg
Winterberg (RWH): Clemens Bracher will be behind the steering ropes of Switzerland’s second sled in the 2-man and 4-man events at the BMW IBSF World Cup in Winterberg. The change was announced by Swiss Sliding, who also confirmed that Bracher would be competing at the next World Cup race and European Championships in Innsbruck (AUT) as well.
Before the start of the season, Swiss Sliding had only nominated Beat Hefti, the overall winner in the 2-man World Cup in 2009 and 2012 and four-time European Champion (2010, 2013, 2014 and most recently 2016) for the three non-European World Cups in Lake Placid, Park City and Whistler. He achieved in his best result in Park City, where he finished 16th in 2-man bobsleigh.
Clemens Bracher, who is currently ninth (2-man bobsleigh) and 16th (4-man bobsleigh) in the overall standings for the IBSF European Cup, was already scheduled to compete in Winterberg. However, Swiss Sliding has now also nominated him for the BMW IBSF World Cup race in Innsbruck, the results of which will also count as the European Championships.
In the women’s bobsleigh, pilot Sabina Hafner will continue to fly the flag for Switzerland. Martina Fontanive is also scheduled to compete in the races in Winterberg and Innsbruck. ©RWH2017

The World Cup schedule for Winterberg

Many athletes facing a mammoth task ahead of the Olympics
Winterberg (RWH): Some athletes in the International Bobsleigh and Skeleton Federation (IBSF) are facing a mammoth task this 2017/2018 Olympic season. Why? The Olympic quotas – which are due to be allocated on 14 January 2018 – will be based on the IBSF rankings, which in turn are calculated using the points from every racing series.
Instead of enjoying a few days off between the North American World Cup events and the fourth round of the BMW IBSF World Cup in Winterberg, many bobsleigh and skeleton athletes instead chose to compete in the North American Cup and European Cup.
The toughest schedule so far is to be likely that of skeleton athlete Katie Tannenbaum from the U.S. Virgin Islands (ISV). Ahead of Winterberg, the 32-year-old has already completed eight races in the Intercontinental Cup, North American Cup and World Cup, which is normally the amount that athletes would complete in one season. John Farrow of Australia used the World-Cup-free week for two skeleton races in the North American Cup in Park City, raking in 150 points for his IBSF ranking by securing two victories.
The North American Cup also saw World Champion Elana Meyers Taylor competing along with Justin Olsen and Nick Cunningham, who each won one of the two 2-man bobsleigh races in Park City. In the 4-man bobsleigh, Olsen and Cunningham each secured a gold and silver medal while Elana Meyers Taylor – who had a male brake squad and was the only female pilot to race – secured one fourth and one fifth-place finish in the 4-man event.
In the European Cup in Königssee, 4-man World Champion Johannes Lochner (GER) attempted to make up some of the points he lost by finishing 21st in the 2-man World Cup in Whistler, while Christina Hengster (AUT) took the same approach after crashing out of the season opener in Lake Placid (USA). Lochner secured victory in the men’s events while Hengster finished fifth in the women’s bobsleigh.
Other World Cup pilots appearing at the European Cup in Königssee included Benjamin Maier (AUT), Belgium’s Elfje Willemsen and An Vanniuewenhuise and the British bobsleigh team with Bruce Tasker, Bradley Hall and Lamin Deen. ©RWH2017

On the sidelines
Colin Freeling (BEL) was the youngest athlete to compete in the Skeleton European Cup in Winterberg. The 15-year-old is the son of Stefaan Freeling, General Secretary of Belgium’s national body Belgische Federatie voor Bob en Sleesporten. The European Cup in Winterberg was the first ever international competition for Colin Freeling, who has only been training for skeleton for a few months. He finished both races in 30th out of 30 athletes from 17 countries. “The result was what we expected as being the ‘lil one between all the big and experienced boys” wrote the up-and-coming athlete on his Facebook page after the race. “But! I have a new personal best on the track of Winterberg.” ©RWH2017

Mateusz Luty and Krzysztof Tylkowski (POL) celebrated Poland’s first ever win in an IBSF race at the 2-man bobsleigh European Cup in Altenberg. In the second race, the pairing pushed Christoph Hafer/Michael Salzer (GER) and the Frenchmen Romain Heinrich/Bruno Naprix into second and third place. In the overall standings for the European Cup, Mateusz Luty is currently fourth (2-man bobsleigh) and eleven (4-man bobsleigh). The 27-year-old is registered to compete in both the 2-man and 4-man events at the BMW IBSF World Cup in Winterberg. ©RWH2017