Lake Placid (RWH): The race for the two overall skeleton titles in the BMW IBSF World Cup has proven to be extra exciting this 2018/2019 season. While Elena Nikitina of Russia leads the women’s event with just 43 points over defending World Cup title holder Jacqueline Lölling (GER), Sungbin Yun (KOR) has just a single-point lead over Russia’s Alexander Tretiakov in the men’s event. By winning his first race of the season in St. Moritz (SUI) in January, Yun only just edged past Russia’s 2014 Olympic gold medal winner to steal the lead. Both athletes have finished on the podium three times at previous World Cup races in Lake Placid. However, Alexander Tretiakov is the only one of the pair to have actually won a race there, securing gold back in December 2016.

So far, four different men and four different women from a total of different six countries have won World Cup skeleton races this season – and Team USA would be delighted to see a seventh nation added to this list when they race in front of a home crowd in Lake Placid. The last skeleton athletes to celebrate a home win at the Mt. Van Hoevenberg Combination Bobsled, Skeleton & Luge Track were Anne O’Shea in December 2016 and her team mate Matthew Antoine in December 2013. The last two women’s skeleton races at this track were won by European Champion Janine Flock (AUT), who declared the track to be one of her favourites on the circuit. In the men’s skeleton, Martins Dukurs (LAT) has won four of his 51 World Cup victories to date in Lake Placid. ©RWH2019

Lake Placid (RWH): The two Olympic Bobsleigh Champions Mariama Jamanka and Francesco Friedrich (both GER) will arrive in Lake Placid (USA) at the top of the overall rankings for the BMW IBSF World Cup ahead of the penultimate race in this season’s eight stops. In 2-woman bobsleigh, Mariama Jamanka holds a 99-point lead over her team mate Stephanie Schneider.

The European Champion already has three wins and three podium finishes under her belt so far this winter. A win in Lake Placid would mark a first for Mariama Jamanka: At her previous two World Cup appearances at the Mt. Van Hoevenberg Combination Bobsled, Skeleton & Luge Track in 2016 and 2017, the German athlete finished in seventh and fifth respectively.

The circumstances are eerily similar for her team mate Francesco Friedrich: Despite having already competed in as many as eleven World Cup races in Lake Placid, the Olympic gold medallist in the 2-man and 4-man bobsleigh in PyeongChang has only managed one bronze medal from November 2012 and most recently one gold medal in the 2-man event back in December 2014.

Unsurprisingly, Team USA traditionally perform well on their home track: Over the past five years, Lake Placid has hosted 16 bobsleigh World Cup races for the three bobsleigh events, with nine of those races won by athletes from the USA. Five of those World Cup wins – four in the 2-man and one in the 4-man bobsleigh – were secured by the athlete Steven Holcomb. The 2010 Olympic Champion in the 4-man event died unexpectedly in May 2017 at the age of 37. ©RWH2019

The schedule for Lake Placid

Anna Fernstädtová won the Czech Republic’s first ever Junior World Championship title in skeleton. The 22-year-old athlete already won gold in the 2018 IBSF Junior World Championships, though that was racing under the name Anna Fernstädt as a competitor for the German team. The silver medal in Königssee went to Kim Meylemans of Belgium ahead of Youth Olympic Champion Ashleigh Pittaway of the UK with bronze.

Felix Keisinger (GER) was awarded the title of 2019 Junior World Champion in the men’s skeleton in Königssee. The overall winner of the 2018 Intercontinental Cup pushed his team mate and overall winner of the IBSF Europe Cup Fabian Küchler (GER) into second place. The Junior European Champion Evgeniy Rukosuev of Russia finished in third.

Sigulda/Innsbruck (RWH): The titles for the 2019 IBSF Junior European Championships were awarded to five athletes from four nations in Sigulda (LAT) and Innsbruck (AUT).

Yulia Kanakina and Evgeniy Rukosuev of Russia won the titles in the skeleton events. At the final to the IBSF Europe Cup in Sigulda (LAT), Yulia Kanakina won the standings in the women’s European Championships ahead of France’s Agathe Bessard, who won bronze at the 2016 Youth Winter Olympic Games. Local hero Dārta Zunte of Latvia won bronze. In the men’s skeleton, Junior European Championship gold went to the Youth Olympic Champion Evgeniy Rukosuev. His team mate Vladislav Semenov (RUS) took home silver ahead of Latvia’s Krists Netlaus with bronze.

The 2012 Youth Olympic Champion in the 2-man bobsleigh, pilot Patrick Baumgartner of Italy won the Junior European Championships in the 4-man bobsleigh. The 24-year-old and his squad of Mattia Variola, Lorenzo Bilotti and Alex Verginer won the final race of the 2018/2019 IBSF Europe Cup season in Innsbruck, thereby securing the title in the Junior European Championships. Silver went to Rostislav Gaitiukevich of Russia and his team while the bronze was awarded to Junior World Champion Richard Oelsner (GER). ©RWH2019


The last World Cup winners in Lake Placid in November 2017

Lake Placid to host its 11th World Championships in 2021

Lake Placid hosted the 1932 and 1980 Olympics and has also provided the setting for the Bobsleigh and Skeleton World Championships a total of ten times to date. The last time World Championship medals were awarded at the traditional and technically challenging Mt. Van Hoevenberg Combination Bobsled, Skeleton & Luge Track was back in 2012. Back then, the hosts – Team USA – won four of the six titles with Katie Uhlaender winning the women’s skeleton, Steven Holcomb winning the 2-man and 4-man bobsleigh and Katie Uhlaender, Matt Antoine, Elana Meyers Taylor/Emily Azevedo and Steven Holcomb/Justin Olsen winning the team event. ©RWH2019

Matt Antoine (USA) – the last US athlete to win the men’s skeleton event at Lake Placid when he achieved victory in 2013 – has decided to stay involved in the sport by becoming a coach. The athlete – who won bronze at the Sochi Olympics in 2014 – announced his retirement from active sport following the selection races in the run-up to the 2018/2019 season despite achieving the best performance at the trials. The 33-year-old then switched straight to the coaching team to look after up-and-coming athletes. At the finale to the IBSF Intercontinental Cup in Lake Placid, Matt Antoine celebrated a third-place finish in the overall rankings for Megan Henry. ©RWH2019

Anne O’Shea (USA) – the last female skeleton athlete from the US to win a World Cup race in Lake Placid back in 2016 – is currently taking a break from sport. “ At the end of last season I decided I just needed to take a step back to reassess what was important to me, what made me happy” said the 31-year-old. “I accepted an internship at Ernst & Young in May and then decided to stay on with them full-time.” However, Anne O’Shea’s return to the sport could still be on the cards: “I haven’t officially retired and haven’t made any concrete decisions,” said the athlete, who finished fifth in the 2016 World Championships. „I've been missing the sliding community so much this year, this October was the first time in 14 years that I did not get on my sled. Sometimes, when I am wishing I was at the track, I just day dream about my favorite runs or favorite places. While its not the same it keeps me happy.” ©RWH2019

Gregor Bermbach (GER) officially retired from active sport at the BMW IBSF World Cup race in St. Moritz (SUI). The bobsleigh brakeman – who will turn 38 on 17 February – took part in two Winter Olympic Games (2010 and 2014) and won two World Championship medals in the 4-man bobsleigh, one with pilot Karl Angerer in 2011 and one with Francesco Friedrich in 2016. In his final race, Gregor Bermbach finished second in the 4-man bobsleigh with pilot Johannes Lochner at the World Cup race in St. Moritz. ©RWH2019

John Napier (USA), who placed 10th in the 2-man bobsleigh at the 2010 Winter Olympics in Vancouver and won his only World Cup 2-man bobsled gold medal on the Lake Placid track, will be seen around the Mt. Van Hoevenberg facility throughout this World Cup weekend. When not attending Chiropractic School, John has been assisting in the track’s operations. The 2009 U.S. 2-Man Bobsleigh Champion (who won with his brakeman Charles Berkeley),  who also served six months on the front line with the U.S. army in Afghanistan in 2010, has been working closely with the long-serving track director Tony Carlino and the staff. Tony is due to retire at the end of February. John is the second generation of Napiers to compete in the sport of bobsleigh. His father, William, was also a bobsleigh pilot and President of the U.S. Bobsled and Skeleton Federation. ©RWH2019 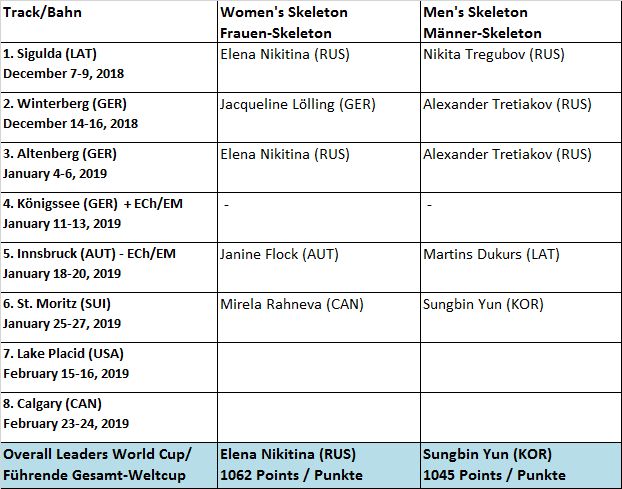 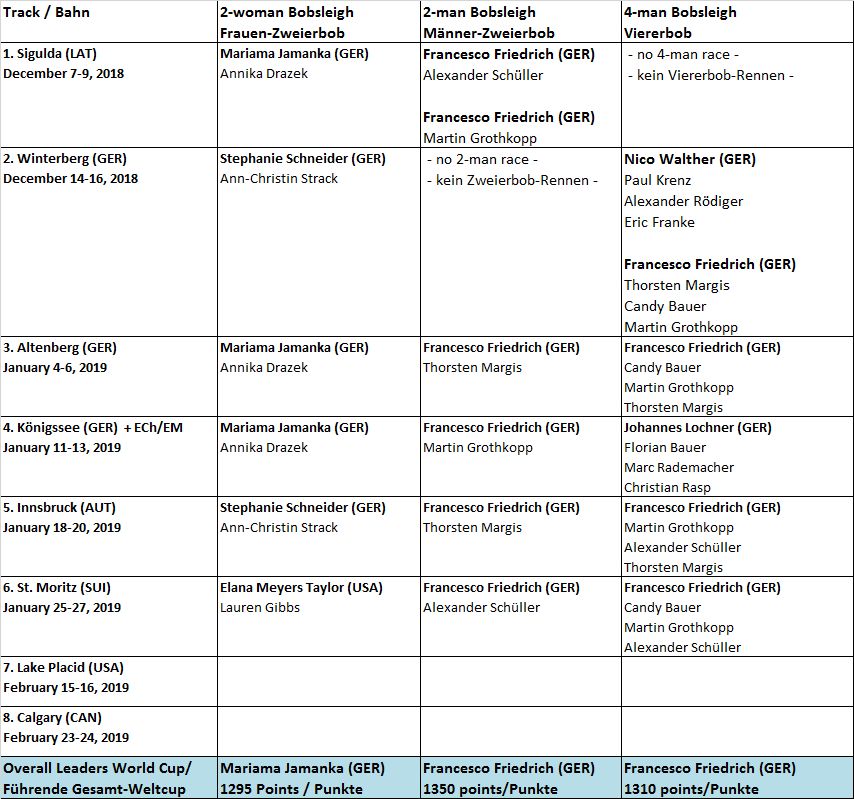