Calgary (RWH) The final of the BMW IBSF World Cup 2018/2019 in Calgary (CAN, 22 - 24 February) will also host the skeleton races that had to be cancelled in Königssee (GER) due to bad weather.

The World Cup weekend in the Canada Olympic Park will therefore kick off on Friday (22 February). The postponed races in women's skeleton and men's skeleton are scheduled to take place from 2.30pm (CET 10.30pm) onwards, local time. All athletes who were registered for the original World Cup in Königssee are entitled to compete.

The final World Cup points of the post-Olympic winter in skeleton will then be decided on Saturday for the women (9am local time/ 4pm CET) and Sunday for the men (8.30am / 4.30pm). Upon completion of the races, the overall winners of the BMW IBSF World Cup 2018/2019 shall be awarded the coveted Crystal Globe trophies.

Russia's Elena Nikitina will head to the final World Cup of the winter at the top of the women's skeleton World Cup table. The Sochi Olympics bronze medallist currently has a 43 point lead over World Cup title defender, Jacqueline Lölling from Germany. World Cup events in Lake Placid saw the two athletes finish with the same time. However, neither of them has a great deal of experience in Calgary: With her only World Cup start there in 2013, Nikitina took second place, while Lölling came in fourth and fifth at the 2012 Intercontinental Cup.

In the men's skeleton, Olympic Champions Alexander Tretiakov (RUS, 2014) and Sungbin Yun (KOR, 2018) continue to battle it out for the World Cup title. A single point separated leader Yun from Tretiakov in second place ahead of the BMW IBSF World Cup in Lake Placid (USA). However, with his third victory of the season in Lake Placid, the Russian managed to overtake the Korean and goes into the final two races of the World Cup winter in Calgary (CAN, 22 - 24 February) with a 24-point lead. ©RWH2019


The last World Cup winners from Calgary in December 2014

After seven of eight races, Mariama Jamanka has a 91-point lead over teammate Stephanie Schneider (GER), who is currently in second place. If Schneider were to win in Calgary, Mariama Jamanka would only need to come in eleventh in order to win the overall standings and hold the impressive Crystal Globe trophy in her hands for the very first time at the BMW IBSF World Cup. Neither pilot has previous experience on the track in Calgary: Mariama Jamanka has never started there, while Stephanie Schneider raced into fifth place alongside pilot Anja Schneiderheinze during her only appearance there in 2012.

Both this winter and since January 2018, Olympic Champion Francesco Friedrich (GER) remains undefeated in the 2-man bobsleigh. The current World and European Champion is a full 187 points ahead of Latvia's Oskars Kibermanis, who holds second place. Francesco Friedrich simply has to complete the race in Calgary without a crash: 39 points would guarantee him the title of overall World Cup Champion - coming in just 25th would already give him 40 points. Both pilots competed at the last World Cup in Calgary in December 2014, with Francesco Friedrich finishing in second place. The winner of that race was also from Latvia, but his name was Oskars Melbardis. His teammate, Oskars Kibermanis, finished 14th.

With 1502 points, Olympic Champion Francesco Friedrich was also able to maintain his lead in the overall standings of the BMW IBSF World Cup 2018/2019 for 4-man bobsleigh, although his fourth-place finish in Lake Placid signalled his first failure to reach to podium this winter. Oskars Kibermanis (LAT, 1424) heads to the final in Calgary in overall second place. European Champion Johannes Lochner (GER, 1405) is in third place overall. ©RWH2019

Calgary (RWH) The final of the BMW IBSF World Cup in Calgary (CAN) is also crucial for determining the final points that are used to calculate the allotted qualification spots for the 2019 BMW IBSF World Championships in Whistler (CAN, 25 February - 9 March 2019). Depending on where the athletes place in the IBSF rankings, which take into account the points achieved over all race series', competing nations are allocated up to three qualification spots per discipline. The IBSF will publish the allotted quotas for the World Championships on 25 January - the decision concerning which athletes are awarded which allotted places is in the hands of the national IBSF federations. More info regarding the participation requirements for athletes can be found at the International Rules. ©RWH2019 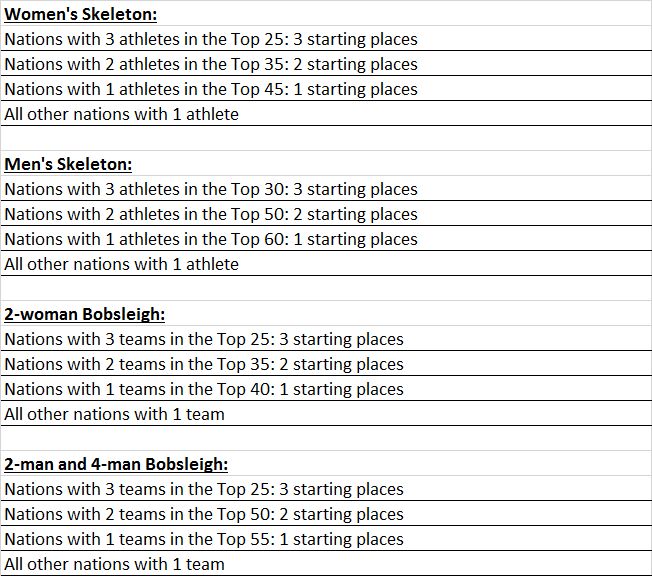 Calgary's Olympic track made famous by the film "Cool Runnings"

Calgary (RWH) When it comes to the world of bobsleigh, the artificial ice track in Calgary's Olympic Park is certainly one of the most famous: It hosted the 2-man and 4-man bobsleigh races at the 1988 Winter Olympics. Alongside Olympic Champions Jānis Ķipurs (URS, 2-man bobsleigh) and Ekkehard Fasser (SUI, 4-man bobsleigh), one team stood out on the world stage - and still does today: The Jamaican 4-man bobsleigh team. The Caribbean team's mere qualification was enough to cause a stir. They didn't stand a chance in the competition itself, coming in 30th in the 2-man bobsleigh and crashing out of the 4-man bobsleigh; Nevertheless, pilot Devon Harris and teammates Dudley Stokes, Michael White and Samuel Clayton launched themselves straight into the hearts of sports fans the world over. In 1993, Hollywood commemorated the team in the film "Cool Runnings".

1988 also saw Prince Albert II of Monaco, at the time heir to the throne and athlete, make his Olympic début in Calgary. With his first five Olympic appearances he came in 25th in the two-man bobsleigh.

For 31 years, the artificial ice track was an integral component of the annual competition schedule of the International Bobsleigh & Skeleton Federation, an excellent example of the sustainable use of a track after hosting the Olympics. The track should initially be closed for urgent repairs for one season. Despite financial commitments from the Canadian government and the province of Alberta, which exist independently from the Olympic bid, there is still a lack of funds, which were due to be used to modernise the cooling system and the sun protection canopy, amongst other things. Some 360m of the track are also to be redeveloped in order to align the luge and bobsleigh/skeleton tracks more effectively. The Calgary park, operated by WinSport Canada and containing the former Olympic track, also serves as the Canadian training centre for winter sports, boasting ice hockey and figure skating facilities as well as a frozen start track for sliding sports.

In 2017, the Canadian province of Alberta pledged 10 million Canadian dollars (some 6.5 million Euros) to support track renovations. Following this, in May 2018, the Minister for Infrastructure, Amarjeet Sohi, committed to provide approximately 6.8 million Canadian dollars (around 4.5 million Euros) in funding for the former Olympic track. However, subsequent calculations indicated that more funding was required.

"It was prudent for us to hit the pause button", explained WinSport Canada CEO, Barry Heck, in a report on globalnews.ca. “We are $8 million short for the necessary work, and the end of the 2026 Olympic and Paralympic bid means those funds are not immediately forthcoming." However, he confirmed that intensive discussions were underway to find a solution.

"An investment in the renovation of parts of the track is an investment in the future of sliding sports in Canada", declared IBSF President, Ivo Ferriani. "It would result in potentially another 30 years of track use. Calgary and the Canadian athletes have a long and incredibly successful history as part of our federation. It would be a terrible shame if we were to lose this sports centre!"

In the run-up to the end of the 2018/2019 World Cup winter, sports fans are looking forward to another long weekend of sliding sport at the Canada Olympic Park. Seven races are scheduled from Friday to Sunday (22nd - 24th February) in Calgary, topped off by six decisions on the overall World Cup Winner in women's skeleton, men's skeleton, 2-woman bobsleigh, 2-man bobsleigh and 4-man bobsleigh, as well as the combined bobsleigh results. ©RWH2019


Katrin Beierl (AUT), Junior World Champion 2019 in 2-woman bobsleigh, will be back to compete in the finals of the BMW IBSF World Cup in Calgary (CAN). The Austrian decided against participating in Lake Placid (USA). The 2018/2019 winter has been Katrin Beierl's most successful season to date: In addition to her Junior World Championship title, which meant she automatically qualified for the 2019 BMW IBSF World Championships in Whistler (CAN) at the beginning of March, the 25-year-old and pusher Jennifer Onasanya took home a surprising bronze medal at the European Championships in Königssee. ©RWH2019


Aaron Victorian (CAN) will compete in skeleton for his new Canadian national federation. The 30-year-old previously raced as a bobsleigh pusher for the US team, pushing for a number of pilots including Steven Holcomb, Nick Cunningham and Codie Bascue. His best results were achieved with Steven Holcomb: In November 2014, the duo took gold in the 2-man bobsleigh at the IBSF North American Cup in Park City (USA). The BMW IBSF World Cup in December 2014 in Lake Placid saw Aaron Victorian race as part of Steven Holcomb's 4-man bobsleigh team, eventually coming in sixth place. Appearing as a competitor for Canada in skeleton, Aaron Victorian took to the track in six races at the 2018/2019 IBSF North American Cup and finished fifth overall. ©RWH2019


Patrice Servelle (MON) has bid farewell to his time competing in the bobsleigh for his home nation and now makes up part of the team of trainers. The Monegasque appeared as a 2-man bobsleigh pilot at the Winter Olympics in 2006, 2010 and 2014. His best World Championships result came in the form of a tenth place finish in the 4-man bobsleigh in St. Moritz (SUI) back in 2007. Patrice Servelle has broken the top ten in the Bobsleigh World Cup several times. He was runner-up in Calgary in December 2010, giving Monaco its first spot on the podium.
The Monegasque almost repeated his success as a trainer: Having brought Monaco its first Olympic medal with bronze at the 2012 Youth Winter Olympics, pilot Rudy Rinaldi came the closest he's ever been to the World Cup podium in St. Moritz. He held third place after his first run but narrowly missed out on a place on the podium for the Principality by a mere 0.2 seconds. In Lake Placid, Rinaldi was the surprise leader after the first run but crashed in the final heat. ©RWH2019


Lelde Priedulena (LAT), 2016 Junior World Champion, has announced that she will no longer compete in skeleton. At her 45 appearances at the BMW IBSF World Cup between 2012 and 2019, the Latvian narrowly missed out on the podium several times, coming in fourth. Lelde Priedulena took seventh place at both the 2017 BMW IBSF World Championships in Königssee and the 2018 Winter Olympics in PyeongChang (KOR). Over the summer, the 25-year-old underwent an operation on her cruciate ligament, causing her to miss the first half of the season of the BMW IBSF World Cup. The European Championship sixth-place finisher of 2016 last competed in the Innsbruck World Cup in January. ©RWH2019 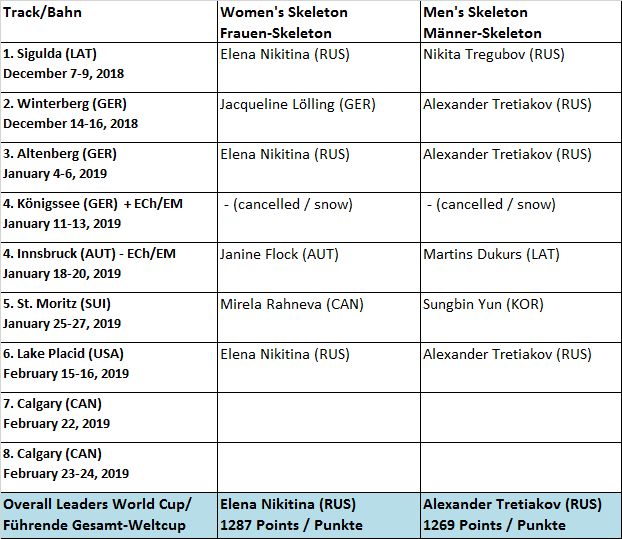