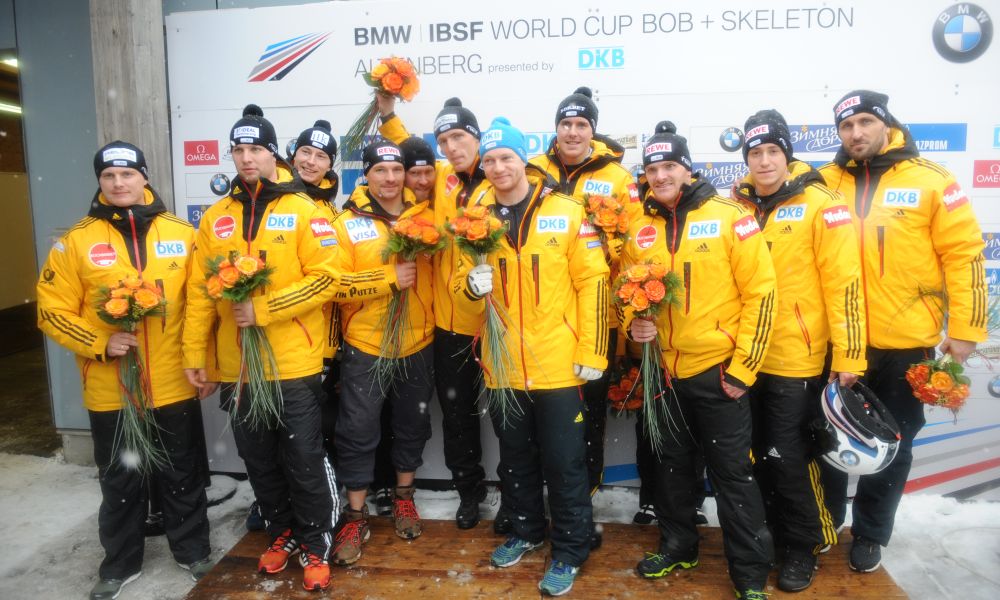 Altenberg (RWH) Bobsleigh pilot Francesco Friedrich of Germany has won the opening race in the BMW IBSF World Cup 2015/2016, his first ever World Cup victory in the four-man bobsleigh. Pushed by Jannis Bäcker, Martin Putze and Thorsten Margis, the European Championship bronze medallist had a mere 0.09 second lead on fellow Germans Nico Walther, Marko Hübenbecker, Christian Poser and Eric Franke, who came in second. World Championship silver medallist Walther, who was in the lead after the first run in Altenberg, was followed by World Champion Maximilian Arndt and his team of Kevin Kuske, Kevin Korona and Ben Heber (GER), who came third 0.24 seconds back.
After the first of eight races, Francesco Friedrich leads the overall rankings in the BMW IBSF World Cup 2015/2016 with 225 points. He is followed by Nico Walther with 210 and Maximilian Arndt with 200.
The complete list of results showing all race times, overall times, and the current world cup rankings can be found at ibsf.org, via Twitter (@IBSFsliding), as well as on the official IBSF website and in the IBSF group on Facebook.

Francesco Friedrich (GER, 2015 European Championship bronze medallist, overall fifth in 2014/2015 World Cup)
“It’s a lot worse if you make a mistake in the four-seater, but it went perfectly on the lower part of the track in the second run. At last we’ve won our first World Cup victory in the four-man event.”