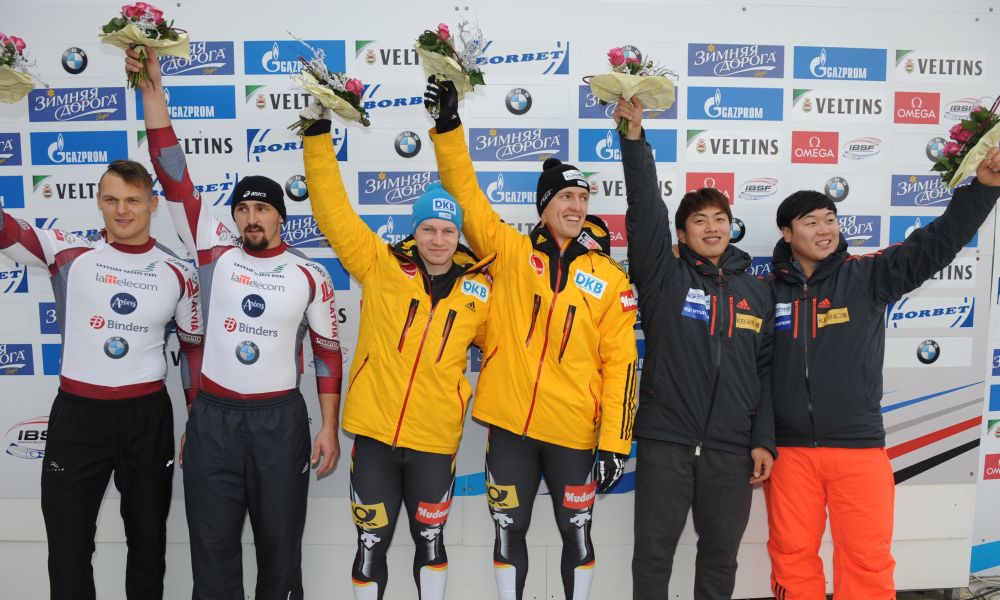 Winterberg (RWH) World and European champion Francesco Friedrich of Germany won the two-man bobsleigh at the BMW IBSF World Cup in Winterberg (GER). The 25-year-old bobsleigh pilot and his brakeman Thorsten Margis celebrated their second victory in the second race of the season. Runner-up in the World Championships and defending World Cup holder Oskars Melbardis of Latvia and Daumants Dreikens finished in second, 0.13 seconds behind the winning duo. In first run Oskars Melbardis and then Francesco Friedrich broke the track record for Winterberg. The German pilot set a new record of 55.02 seconds and also achieved a new starting record of 5.05 seconds, beating Beat Hefti’s (SUI) old starting record which had stood for seven years.
The Koreans Yunjong Won/Youngwoo Seo (0.34 seconds behind) came in third at the BMW IBSF World Cup in Winterberg, following on from the Korean team’s milestone finish in the top three at the World Cup season opener in Altenberg.In fourth place, Nick Cunningham/Carlo Valdes of the USA celebrated their best result on a European track.
Overall, the top ten featured teams from a total of eight countries.
Following the second of the season’s eight races in the BMW IBSF World Cup 2015/2016, the overall standings are still led by Francesco Friedrich (GER, 450 points) followed by Oskars Melbardis (LAT, 420) and Yunjong Won (KOR, 400).
Complete results lists showing all race times, overall times and the latest World Cup standings can be found at www.ibfs.org, via Twitter (@IBSFsliding), on the official IBSF page, and on the IBSF Facebook group.

Quotes:
Francesco Friedrich (GER, World Champion 2013 and 2015, European Champion 2015)
“We finally managed to achieve what we set out to do, setting a new starting record. A good start meant twice as much today seeing as our second run in particular, didn’t go so well.”

Yunjong Won (KOR, fifth in the 2015 World Championship)
“Despite all of our hard work in the run-up, we were still surprised by our first podium finish in Altenberg. We were feeling great in Winterberg and are delighted to be back on the podium.”