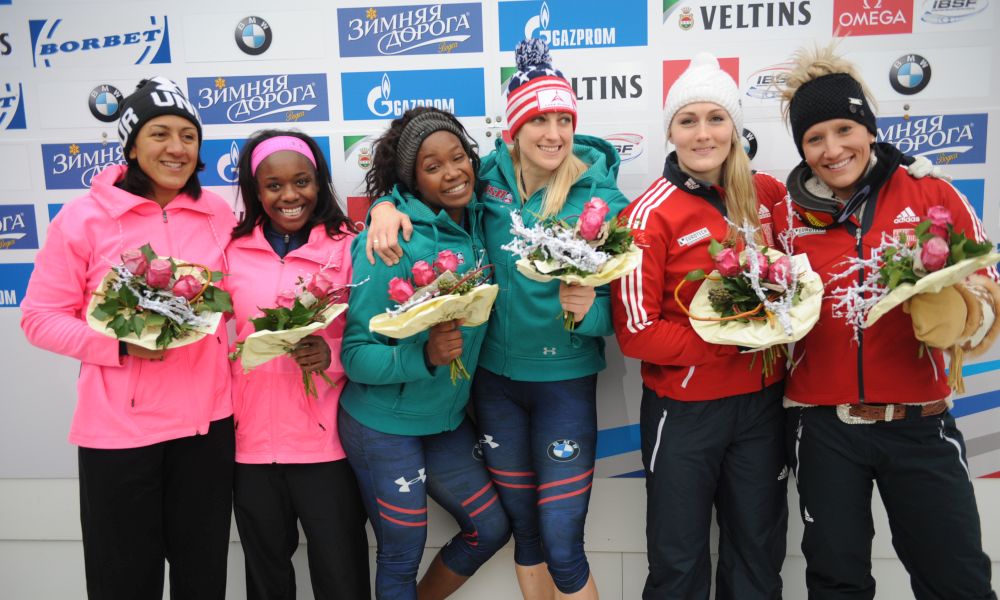 Winterberg (RWH) Bobsleigh pilot Jamie Greubel Poser of the USA has won the Winterberg World Cup, her second victory of the series. In the second round of the BMW IBSF World Cup 2015/2016, the 2014 Olympic bronze medallist and her brakewoman Cherrelle Garrett had a 0.15 second lead on the second US team of World Champion Elana Meyers Taylor and Kehri Jones, who set a new push-start record of 5.43 seconds. Third place in Winterberg went to Olympic Champion Kaillie Humphries of Canada and brakewoman Melissa Lotholz, 0.35 seconds back.
Jamie Greubel Poser, who came third in the overall World Cup rankings last winter, made it to the top of the podium for the first time in January 2014 on the Innsbruck ice track, which will be hosting this season’s World Championships.
After the second of eight races in the BMW IBSF World Cup, World Champion Kaillie Humphries (CAN) and Jamie Greubel Poser (USA) are tied for top place in the overall rankings with 425 points each. Elfje Willemsen of Belgium, who came sixth in Winterberg, is overall third.
Complete results lists showing all race times, overall times and the latest World Cup standings can be found at ibsf.org, via Twitter (@IBSFsliding), on the official IBSF page, and on the IBSF Facebook group.

Jamie Greubel Poser (USA, 2014 Olympic bronze medallist, overall third in the 2014/2015 World Cup)
“This victory is a great success for me, brilliant! I don’t have a secret recipe, we just worked hard. Because I’m not so big, it maybe helps that a new rule requires the sled and crew together to be a bit lighter this season.”

Elana Meyers Taylor (USA, 2015 World Champion, overall winner of the 2014/2015 World Cup, 2014 Olympic silver medallist)
“Winterberg is definitely one of my favourite tracks. I’ve been struggling a bit this season, so making the podium is a great relief. And my teammates won, so this was a good team performance.”

Kaillie Humphries (CAN, 2010 and 2014 Olympic Champion, 2012 and 2013 World Champion)
“Winterberg isn’t really a hard track, but it is hard for me. It’s my biggest nemesis. Making the podium is a great improvement after seventh in the World Championships here.”