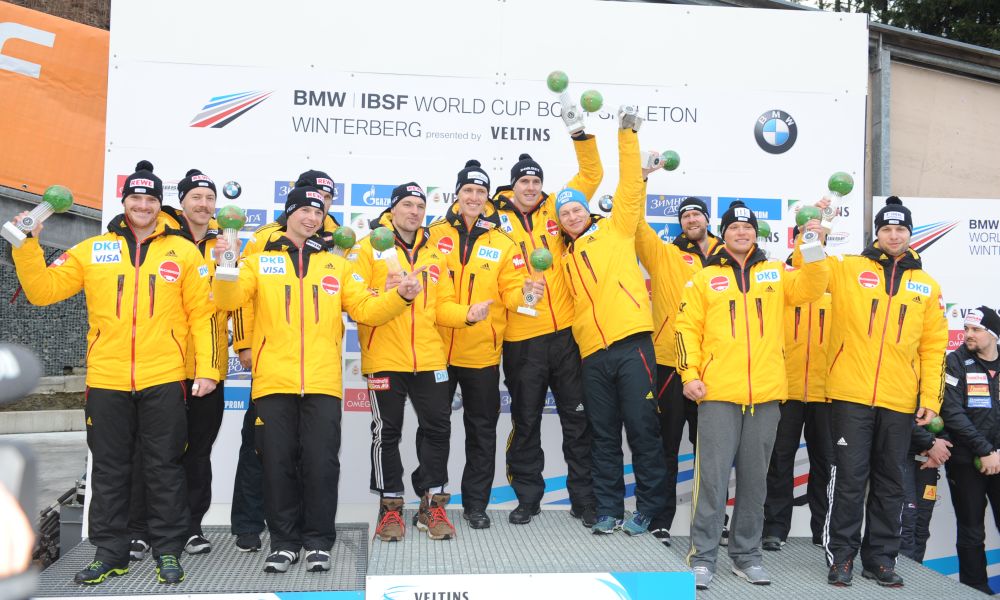 Winterberg (RWH) Francesco Friedrich of Germany has notched up his second World Cup four-man victory in the second round of the BMW IBSF World Cup 2015/2016. Pushed by Jannis Bäcker, Martin Putze and Thorsten Margis, the European Championship bronze medallist had a mere 0.05 second lead on fellow Germans Maximilian Arndt with Alexander Rödiger, Kevin Kuske and Ben Heber, who came in second. World Champion Arndt, who was in the lead after the first run, was followed by Nico Walther, Marko Hübenbecker, Christian Poser and Philipp Wobeto (0.16 seconds behind), whose third place made for an all-German podium line-up in Winterberg.
Rico Peter of Switzerland, who was only a hundredth of a second behind the leader after the first run, missed the podium at the end of the race by just 0.01 seconds, and made fourth.
After the second of eight races in the BMW IBSF World Cup 2015/2016, Francesco Friedrich still heads the overall rankings with 450 points. Fellow Germans Maximilian Arndt and Nico Walther are tied for second with 410 points each.
Complete results lists showing all race times, overall times and the latest World Cup standings can be found at ibsf.org, via Twitter (@IBSFsliding), on the official IBSF page, and on the IBSF Facebook group.

Quotes:
Francesco Friedrich (GER, 2015 European Championship bronze medallist, overall fifth in the 2014/2015 World Cup
“Pretty much everything is right for us at the moment. The conditions were good today, but we were pretty slow. I’m not used to driving down the track at that speed.”

Maximilian Arndt (GER, 2013 and 2015 World Champion, 2012 and 2013 European Champion, overall third in the 2014/2015 World Cup)
“I messed that second run up myself. Congratulations to Francesco. He's on top form at the moment and is hardly making any mistakes.”

Nico Walther (GER, 2015 World Championship silver medallist, overall fourth in the 2014/2015 World Cup)
“With our start times we can be happy to make the podium. We need to work really on hard on that.”