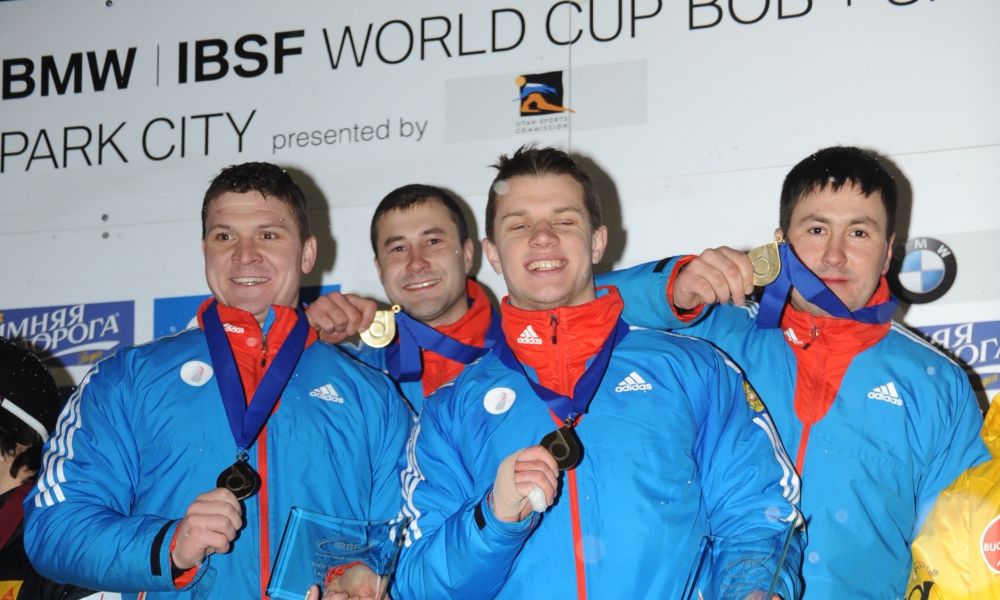 Maximilian Arndt second in four-man bobsleigh ahead of Rico Peter

Park City (RWH) Bobsleigh pilot Alexander Kasjanov of Russia, who came second in the 2015 European Championships, has won his first World Cup victory in Park City (USA), standing at the top of the podium with his crew of Ilvir Huzin, Alexei Pushkarev and Aleksey Zaytsev for the first time in the four-man bobsleigh. In the first victory of a Russian four-man team since January 2013 in Königssee (GER), when Olympic Champion Alexander Zubkov took the title, Kasjanov beat World Champion Maximilian Arndt of Germany and his team of Kevin Korona, Alexander Rödiger and Ben Heber down to a close second (0.04 seconds behind). The Swiss team piloted by Rico Peter and pushed by Simon Friedli, Thomas Amrhein and Fabio Badraun (0.22 seconds behind) was third in Park City, the second time this winter.
Ugis Zalims of Latvia, who was seventeenth after the first run, improved his time so impressively in the second run that he finished fifth, his best ever World Cup result in the four-man event.
After the fifth of eight races, Maximilian Arndt has extended his lead in the overall BMW IBSF World Cup 2015/2016 standings and now has 1055 points. He is followed by fellow German Francesco Friedrich, who came seventh in Park City, with 986 points. Rico Peter is overall third with 968 points.
Complete results lists showing all race times, overall times and the latest World Cup standings can be found at ibfs.org, via Twitter (@IBSFsliding), on the official IBSF page, and on the IBSF Facebook group. ©RWH2015-2016