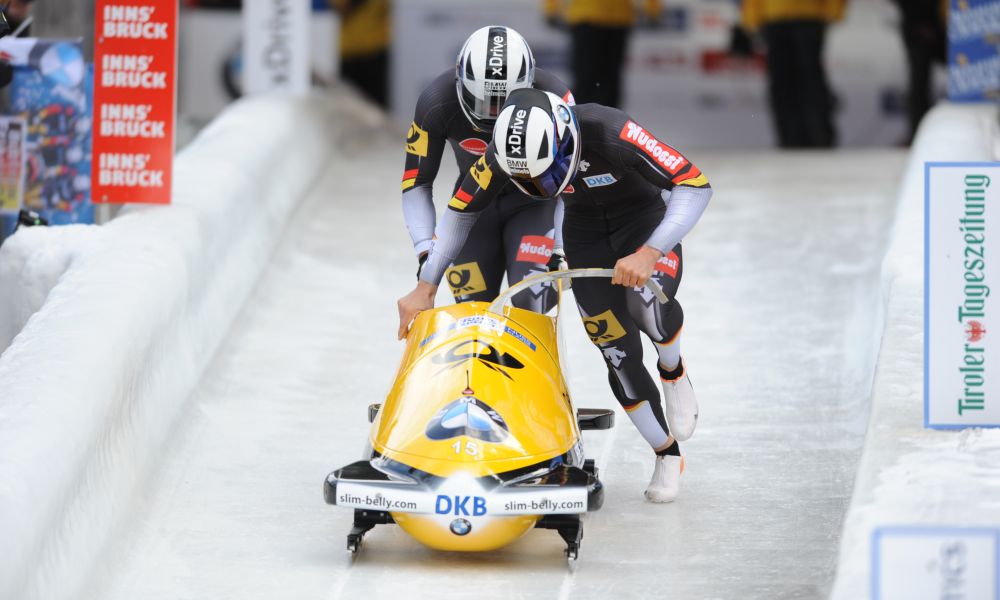 Innsbruck (RWH) Junior World Champion Johannes Lochner from Germany is on course for gold in the two-man bobsleigh at half-time in the BMW IBSF World Championships 2016 in Innsbruck (AUT). Last year’s silver medallist and his brakeman Joshua Bluhm have a 0.15 seconds lead on the field of 34 sleds after two of the four runs. Defending World Champion Francesco Friedrich of Germany is in second with Thorsten Margis before the final heats on Sunday. Oskars Melbardis and Daumants Dreiskens of Latvia, who tied with Lochner/Bluhm for silver last year, are a close third just 0.17 seconds back.
Several teams behind the top three duos at half-time can still hope for medals in the final count: European Champion Beat Hefti/Alex Baumann (SUI, 0.22 seconds behind), Chris Spring/Lascelles Brown of Canada (0.35 seconds behind) and the British pairing of Bruce Tasker/Joel Fearon, who are currently in a surprise sixth 0.37 seconds back. The duo leading the World Cup rankings, Yunjong Won and Youngwoo Seo of Korea, are seventh 0.39 seconds back.
Runs three and four in the two-man bobsleigh be raced on Sunday, 14 February at 9.30 am and 11.00 am CET. ©RWH2015-2016

Johannes Lochner (GER, silver in 2015 World Championships, 2016 Junior World Champion)
“We wanted to risk everything on the first day so that we get a better start number. And of course we hoped that we’d be among the leaders after coming second last year. But I’m actually quite surprised at our lead and good start times.”

Francesco Friedrich (GER, 2013 and 2015 World Champion, 2015 European Champion)
“That was good for starters, but we still need to wipe out a few small errors. We ran further in the start for the second run: the distance was too short in the first. We’re going for the attack tomorrow.”