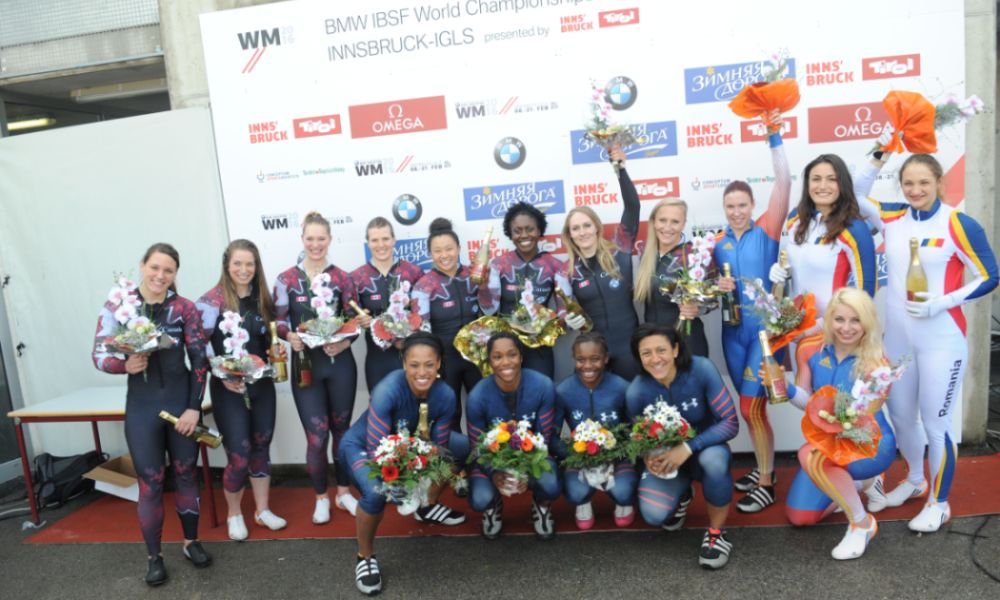 Innsbruck (RWH) Kaillie Humphries from Canada is the winner of the first official IBSF Exhibition Race for four-women bobs. With Cyntia Appiah, Kasha Lee and Melissa Lotholz the 2010 und 2014 Olympic Champion in women’s bob hat a 0,76 seconds lead ahead of their Canadian teammates Alysia Rissling, Janine McCue, Julia Corrente and Christine DeBruin. Maria Constantin, Olivia Vild, Andreea Grecu und Erika Annett Halay (ROU, 0,83 seconds back) finished third ahead of the US-Team 2015 World Champion Elana Meyers Taylor with Lauren Gibbs, Terra Evans and Kehri Jones.
The Exhibition Race was part of the program of BMW IBSF World Championships Bob + Skeleton 2016 in Innsbruck.
In autumn 2014 the IBSF had decided to allow women to compete in four-man races as pilots and push athletes. First pilots in World Cup were Kaillie Humphries (CAN) and Elana Meyers Taylor (USA), competing with male push athletes. The first all-female team was then piloted by Alysia Rissling (CAN) at IBSF North American Cup in Calgary in February 2015.
©RWH2015-2016

Kaillie Humphries (CAN)
„Of course the four-women-bob is an athletic challenge for me but we have shown that we can do this. I am an athlete, I want to win medals and ultimately I want this event to be part of the official race series.“

Alysia Rissling (CAN)
„I am so happy that we are able to be part of it, especially at such an important event as the World Championships. It was lots of fun but it was also a real race for us.“

Maria Constantin (ROU)
„We are not so good at the start but we had two really good runs. A great day!“

Elana Meyers Taylor (USA)
„A four-woman team is a different challenge and we had not much time to practise together. But I am happy that we got the opportunity to race here and to show that women can do this.“