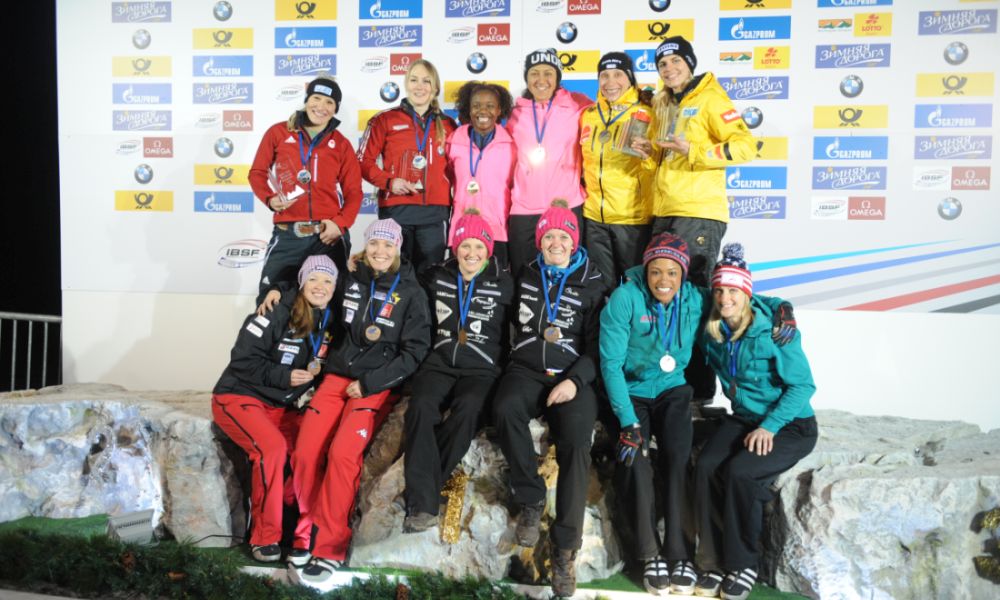 Königssee (RWH): Bob pilot Elana Meyers Taylor of the USA has won the final race in the 2015/2016 BMW IBSF World Cup. On the artificial track in Königssee (GER), the 2015 World Champion and Kehri Jones pushed the Canadian pairing of Kaillie Humphries, the 2010 and 2014 Olympic Champion, and Melissa Lotholz (0.03 seconds behind) into a close second place. Humphries and Lotholz have stood together on the podium at every one of this winter’s World Cup races and also won silver at the 2016 BMW IBSF World Championships in Innsbruck.
The World and European Champion Anja Schneiderheinze of Germany (0.22 seconds behind) finished the season’s final race in third place with her second podium finish of the World Cup.
In the overall standings for the 2015/2016 BMW IBSF World Cup, Kaillie Humphries (CAN, 1728) celebrated her third victory after wins in 2013 and 2014. Second place in the overall standings went to Jamie Greubel Poser (USA, 1628), who came sixth in Königssee. Christina Hengster (AUT, 1546), fourth in the World Cup final, finished third overall to become Austria’s first female bobsleigh pilot to finish on the podium in the overall World Cup rankings.
Complete results lists showing all race times, overall times and the latest World Cup standings can be found at www.ibsf.org, via Twitter (@IBSFsliding), on the official IBSF page, and on the IBSF Facebook group. ©RWH2015-2016

Elana Meyers Taylor (USA, 2015 World Champion, overall winner in the 2015 World Cup)
“It is a huge relief. My coaches really helped me to face this track again after my fall. And Kehri got us off to a great start. An amazing end to a tough season.”

Kaillie Humphries (CAN, 2010 and 2014 Olympic Champion, 2012 and 2013 World Champion)
“Sure, I am a bit disappointed today, mainly because we were outstarted by some teams. So, we have got enough to work on for next season. But we have been consistently good throughout the whole season and I am really happy with the overall win in the World Cup.”