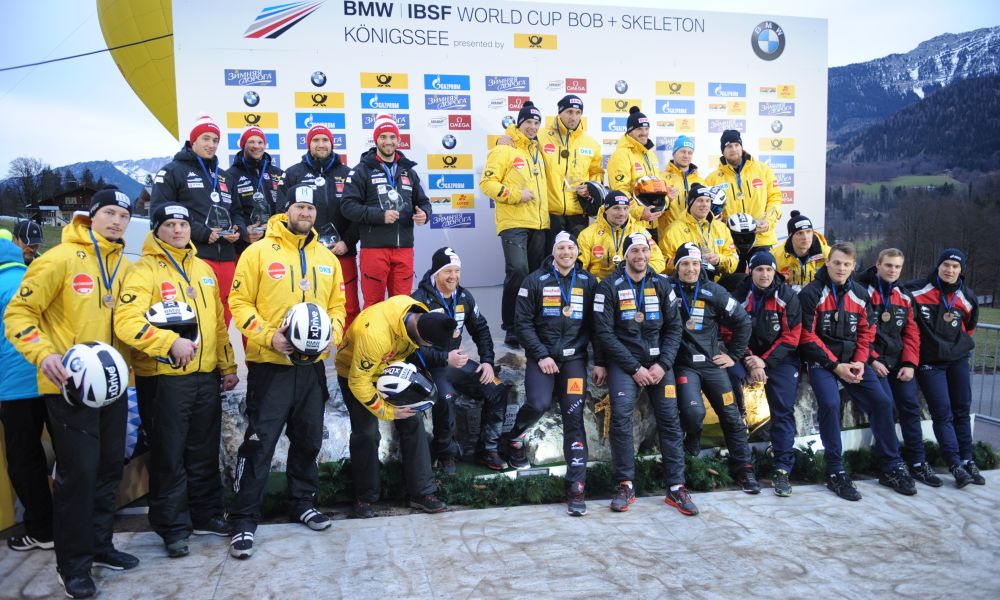 Benjamin Maier second ahead of Francesco Friedrich in Königssee

Königssee (RWH) After winning his third World Cup race of the season and finishing on the podium in all eight races, bobsleigh pilot Maximilian Arndt of Germany has come first in the overall World Cup standings for the second time after 2014. In the final race in the BMW IBSF World Cup 2015/2016 on the artificial ice track in Königssee (GER), the 2013 and 2015 World Champion and his crew of Alexander Rödiger, Kevin Kuske and Martin Putze had a 0.13 second lead on the Austrian team of Benjamin Maier, Marco Rangl, Markus Sammer and Danut Ion Moldovan, who finished second. This was Maier’s second World Cup podium finish in succession after placing second in St Moritz (SUI). Third place in Königssee went to two-man World Champion Francesco Friedrich with Candy Bauer, Martin Grothkopp and Thorsten Margis of Germany, 0.24 seconds behind.
Loic Costerg of France and his crew of Vincent Castell, Yannis Pujar and Jeremie Boutherin ended the 2015/2016 season with the best result of his career, coming eighth in Königssee.
The winner of the overall standings in the BMW IBSF four-man bobsleigh World Cup, Maximilian Arndt, has 1715 points. Francesco Friedrich is overall second with 1570 points, and World Championship bronze medallist Rico Peter of Switzerland, who finished sixth in Königssee, is overall third with 1512 points.
Victory in the combined two-man/four-man bobsleigh standings went to 2015 World Championship silver medallist Nico Walther (2942 points) ahead of his teammate Maximilian Arndt (2859 points). Rico Peter is also third in the combined standings with 2849 points.
Complete results lists showing all race times, overall times and the final World Cup standings can be found at www.ibsf.org, via Twitter (@IBSFsliding), on the official IBSF page, and on the IBSF Facebook group. ©RWH2015-2016

Benjamin Maier (AUT, second in 2016 European Championships, fifth in 2016 World Championships)
“What an unbelievable second half of the season. After the injuries at the season start we had to split up the team and couldn’t pool our strengths until later. But I still don’t really know how we did it.”

Francesco Friedrich (GER, second in 2016 World Championships, third in 2015 European Championships)
“There were little things that weren’t quite right throughout the season. In the four-man it was particularly difficult, because we had to keep reforming the team after injuries. It’s great that Martin (Grothkopp) was able to celebrate a sort of comeback at the end.”