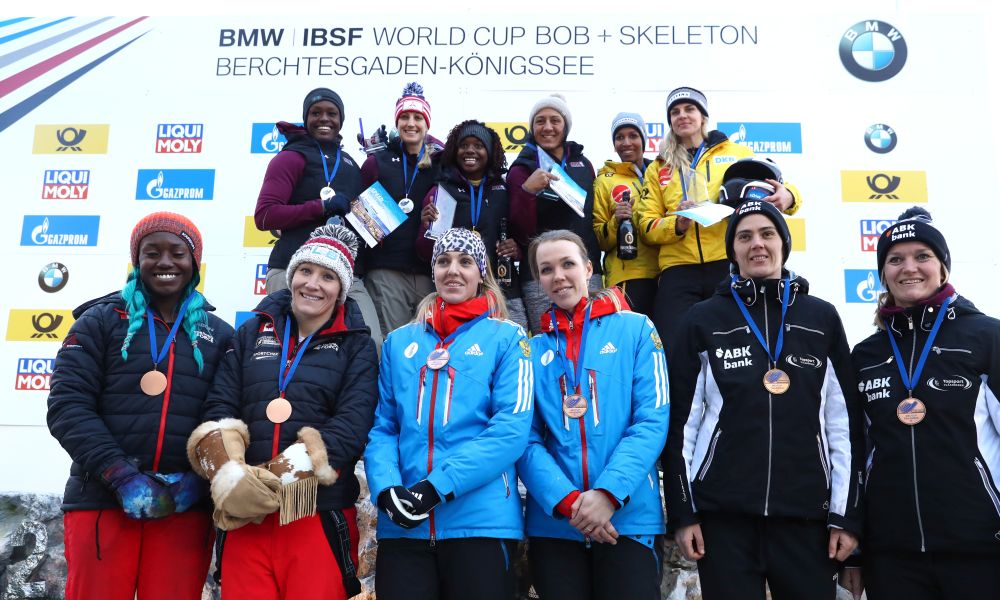 Königssee (RWH): Bobsleigh pilot Elana Meyers Taylor of the USA has celebrated her third consecutive victory at the BMW IBSF World Cup in Königssee. In doing so, the 2015 World Champion and her brakewoman Kehri Jones pushed their team mates Jamie Greubel Poser and brakewoman Aja Evans (USA, 0.26 seconds back) into second place. In the second heat, European Champion Mariama Jamanka racing with Annika Drazek (GER, 0.66 seconds behind) managed to oust Olympic Champion Kaillie Humphries/Cynthia Appiah of Canada from third place to celebrate their second podium finish of the World Cup.

Japan’s Maria Oshigiri and her brakewoman Arisa Kimishima secured their first spot in the top ten at a World Cup event in Königssee.

The sixth World Cup race in this pre-Olympic season was also a trial run for the 2017 BMW IBSF Bobsleigh and Skeleton World Championships, which will see athletes returning to Königssee from 13 February onwards.

Ahead of the last two races, Kaillie Humphries (CAN, 1236 points) continues to lead the overall standings in the 2016/2017 BMW/IBSF World Cup. However, her lead over second-place Jamie Greubel Poser (USA, 1219) has shrunk to just 17 points. Despite finishing eighth in Königssee, Christina Hengster (AUT, 1106) defended her position in third place in the overall standings.

Elana Meyers Taylor (USA, 2014 Olympic silver medallist, 2015 World Champion)
“Königssee is a tricky track. The Kreisel curve here at Königssee is still my arch nemesis! I again struggled there today. However, our good start times were enough to secure the win.”

Jamie Greubel Poser (USA, 2014 Olympic bronze medallist)
“We don’t have many chances to train on European tracks so it was a good test for the World Championships here today. It helped us to find the tricky parts and learn how to tackle them.”

Mariama Jamanka (GER, 2017 European Champion)
“Our runs weren’t completely clean. Curve four didn’t go well for me, particularly in the second heat. We definitely have a bit of room left to improve!”