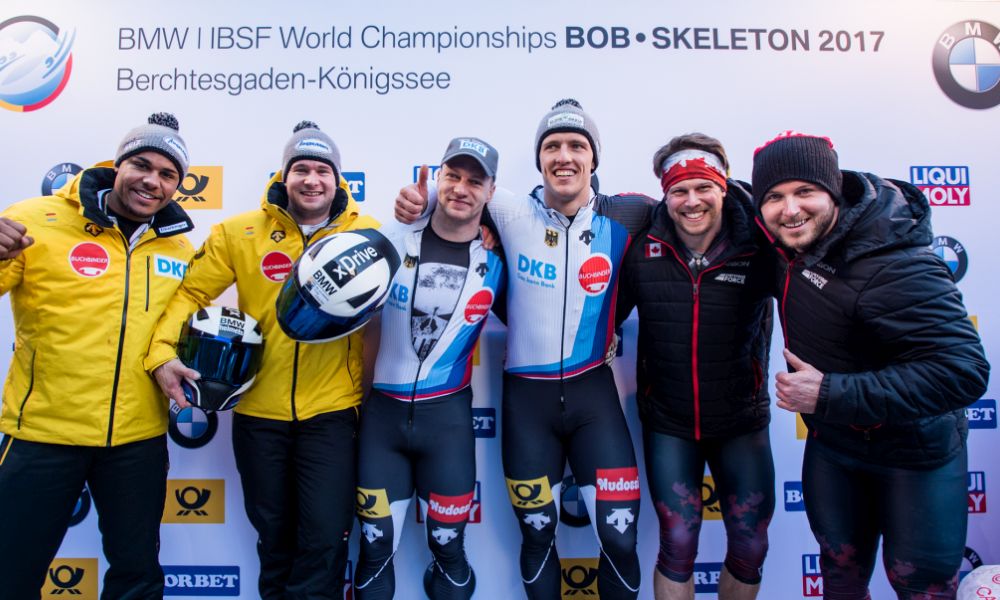 Justin Kripps takes silver ahead of Johannes Lochner with bronze

Königssee (RWH): Gold in the two-man bobsleigh and a fourth consecutive title: Francesco Friedrich of Germany has won the 2017 BMW IBSF World Championships in Königssee (GER). By achieving the best time on all four runs, the 26-year-old bobsleigh pilot and his brakeman Thorsten Margis secured a 1.20-second lead over of the rest of the field in the two-man bobsleigh and his fourth consecutive title after winning gold in 2013, 2015 and 2016.

In doing so, Francesco Friedrich closed on in Italy’s legendary bobsleigh pilot Eugenio Monti. After securing the title in 1957, 1958, 1959, 1960 and 1961, he is the only athlete to win the World Championships on five consecutive occasions (in 1960, his Olympic gold medal also counted as a World Championship title).

On his fourth run, local hero Johannes Lochner with Joshua Bluhm (GER, 1.25 seconds back) defended the bronze medal position ahead of the Latvian duo of Oskars Kibermanis/Matiss Miknis in fourth place.

“Our starts were good and we had four great runs. We did our homework after the World Cup race here. I still have to do a bit of work to become the best bobsleigh pilot of all time as there are still a few people ahead of me. But I am still young.”

„At first I want to say thanks to everybody who is still behind us and support us. It was a pretty dismal season but we managed to turn around and got it when it counts. I really love Königssee, I’ve quite a history here. It’s amazing to come down to win a medal and it’s even sweeter at the World Championships.“

“It was a shame that the first three runs were more or less write-offs. However, the fourth run showed that we could do it. Now I am just happy that it’s over and we were able to hold onto our place on the podium. In the four-man event next week, I’m sure we can build a bit on our starts and then things will be great.”