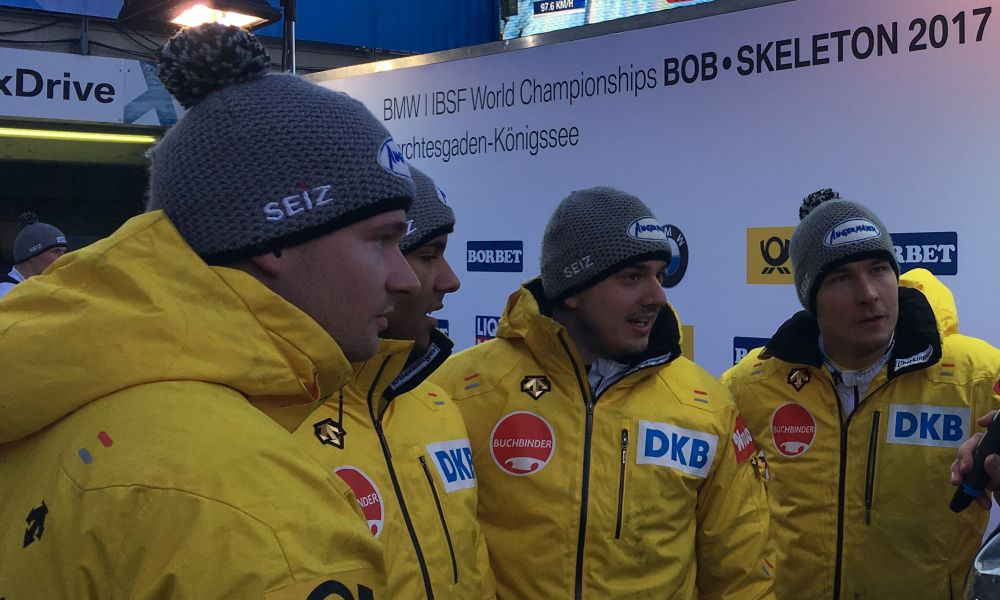 Königssee (RWH) Bobsleigh pilot Johannes Lochner from Germany is on course for 4-man bobsleigh gold at half-time in the BMW IBSF World Championships 2017 at Königssee (GER). A tight lead of 0,03 seconds ahead of the rest of the field the European Champion and his brakeman crew of Matthias Ka-gerhuber, Joshua Bluhm and Christian Rasp have after two of four heats. To kick-off, Lohannes Loch-ner in first heat set a new track record on his home track Königssee (now 48,26 seconds).

As tight as between rank one and three it is also behind the leaders. Between 2010 Olympic Champion Steven Holcomb (USA, 0,18 seconds back) as fourth and the crew of teammate Justen Olsen (USA, 0,51 seconds back) on rank 12 are eight teams of five nations devided by less than half a se-cond.©RWH2017

Johannes Lochner (GER, European Champion 2017, Junior World Champion 2016)
„Our start time in second run was even better than in the first heat. We are on top again regarding this but in the track we can be better. We will find out how to eliminate the errors until tomorrow.“

Francesco Friedrich (GER, World Championships silver 2016, European Championships bronze 2017)
„The Latvians are faster at the start in the moment, there we have to figure out what to do. We will try to beat the start record tomorrow!“

Oskars Melbardis (LAT, World Champion 2016, Olympic silver medallist 2014)
„We had really good start times, the boys did an awesome job! Also I am really happy about my second heat. Now we will have dinner, prepare the seld for the final day and try to get enough sleep.“