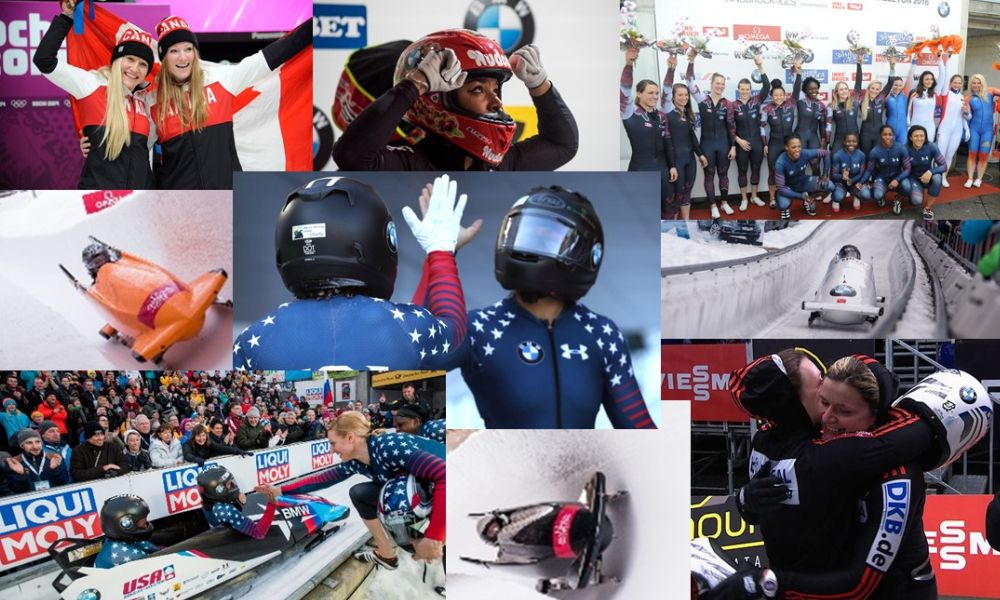 For today’s International Women’s Day we proudly present: some of our pioneers and role models in women’s bobsleigh

In 1940, the 24-year-old piloted her bobsleigh to victory in the US Championships alongside male brakemen. “Bobsledding, since its inception a stronghold of male sport, bowed Monday to femininity,” according to a quote from the US Association (USABS) in an AP report after the race. Katharin Dewey, who like all women was banned from competing in championship races later, was inducted into the Hall of Fame of the federation US Bobsled and Skeleton (USABS) in 2014 “for paving the way for women to compete in the sport“.

Gaby Kohlisch was a successful luge athlete (1990 and 1995 World Champion, 1987, 1991, 1993 silver medal) before switching to bobsleigh. Today she passes on her experience as sports head coach in a German Marine school.

All four pilots competed in 4-man bobsleigh World Cups since IBSF allowed female pilots at the beginning of the 2014/2015 season – with mixed or all-female crews. Maria Constantin piloted the first ever all-female 4-man bobsleigh sled during BMW IBSF World Championships 2017 at Königssee.

Nicola Minichiello and Gillian Cooke won the 2009 World Championships in women’s bobsleigh to become the first British duo to win this title. In 2012, Nicola Minichiello became the first woman as head coach of a bobsleigh team, working with the athletes from the Netherlands (women and men). Her pilot Esme Kamphuis was fourth at the 2014 Sochi Winter Olympics. Additionally, Nicola Minichiello was responsible for the small nations programme of IBSF and is currently IBSF Coordinator for the North American Cup.

Sandra Kiriasis, who retired after the 2014 Sochi Olympics, is still the most decorated pilot in women’s bobsleigh with Olympic Gold (2006), three times World Championships gold (2005, 2007, 2008) and nine titles in Overall World Cup with a total of 45 World Cup victories.

From the beginning, Para-bobsleigh as well as Para-skeleton were mixed gender events, open for women and men. Latvia’s Annija Krumina and Dawn Macomber from USA were the first women to compete at IBSF Para-sport World Championships in 2017. In summer 2016, the International Paralympic Committee IPC provisionally included Para-bobsleigh in the programme for the 2022 Winter Paralympics in the Chinese capital, Beijing.