PyeongChang (RWH): Bobsleigh pilot Alexander Kasjanov of Russia has finished first at the final race in the 2016/2017 BMW IBSF World Cup in PyeongChang (KOR). With his crew of brakemen Aleksei Pushkarev/Vasilij Kondratenko/Alexey Zaitsev, Kasjanov set the track record (49.97 seconds) in the final race of the season and secured a 0.23-second lead over the Swiss crew of Rico Peter with Bror van der Zijde/Alex Baumann/Thomas Amrhein after two runs. Third place at the World Cup finale and Olympic rehearsals went to Oskars Kibermanis/Janis Jansons/Matiss Miknis/Raivis Zirups of Latvia (0.26 seconds back), who secured the first start record on the Olympic track with 4.97 seconds. The Alpensia Sliding Centre in PyeongChang is set to host the ice track events for the 2018 Winter Games in almost a year's time.

In the overall standings for the 4-man bobsleigh for the 2016/2017 BMW IBSF World Cup, the second win of the season for Alexander Kasjanov (RUS, 1500 points) ultimately gave him a narrow lead over Rico Peter (SUI, 1471). Steven Holcomb of the USA (1362) finished third overall after coming tenth in PyeongChang.

In the combined overall standings for the BMW IBSF World Cup – calculated by adding together all results from the 2-man and 4-man bobsleigh races – World Champion Francesco Friedrich of Germany moved ahead of long-standing leader Alexander Kasjanov at the last stop of the season in PyeongChang. His win in the 2-man bobsleigh and eleventh-place finish in the 4-man bobsleigh were enough to give Francesco Friedrich (GER, 2769 points) the top spot with a narrow margin of just three points over Alexander Kasjanov (RUS, 2766). Steven Holcomb (USA, 2693) ends the final season ahead of the Olympics in third place in the combined overall standings. ©RWH2017 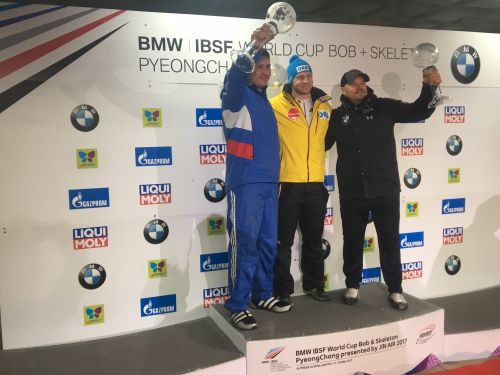 Altenberg, Innsbruck and Winterberg step in for Königssee
22 May 2021