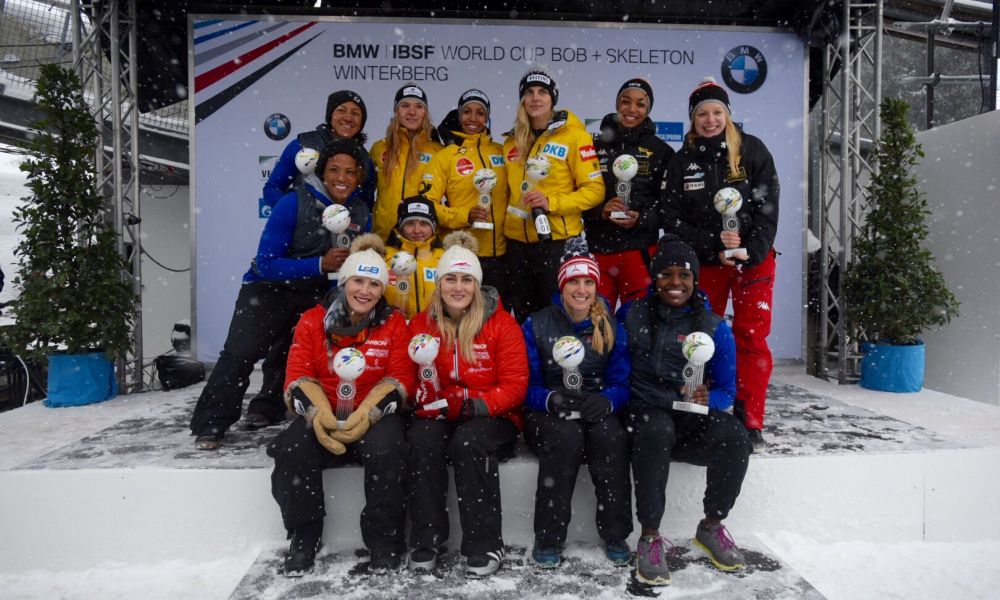 Elana Meyers Taylor in second ahead of Mariama Jamanka

Winterberg (RWH): Stephanie Schneider of Germany has celebrated her first ever victory as a bobsleigh pilot at the BMW IBSF World Cup race in Winterberg (GER). Racing with Lisa Buckwitz, Schneider – who won silver in the 2015 European Championships and bronze in the 2015 World Championships as brakewoman for Cathleen Martini – won the race with a 0.26-second lead over World Champion Elana Meyers Taylor (USA) with Lauren Gibbs. European Champions Mariama Jamanka/Annika Drazek (GER, 0.28 seconds back) finished third.
Katrin Beierl/Jennifer Onasanya of Austria, who have already won four races in the European Cup, finished in fifth on their season début in the BMW IBSF World Cup, marking their best ever World Cup result to date.
Jazmine Fenlator-Victorian/Carrie Russell, Jamaica’s first ever women’s team to compete in the BMW IBSF World Cup, finished their first ever World Cup race in seventh place.
After the North American World Cup races, the teams from the USA and Canada, including Elana Meyers Taylor, defending World Cup holder Jamie Greubel Poser (USA, sixth place) and current leader Kaillie Humphries of Canada (fourth place) had their sleds and other equipment delivered to Winterberg shortly before the World Cup race. The athletes had to borrow equipment from other countries to complete the training session.
Kaillie Humphries (CAN, 852 points) managed to defend her lead in the overall standings for the 2017/2018 BMW IBSF World Cup race. At the halfway point in the season, Elana Meyers Taylor (USA, 820) is second ahead of Jamie Greubel Poser (USA, 803).
For more detailed information including results and the current ranking please visit ibsf.org. ©RWH2017

“To be honest, after my second run, I thought I wouldn’t get anything. Of course, we are feeling relieved now, particularly because, with Mariama and Anna Köhler too, the entire German team did really well!”

“I don’t think I’ve ever been so happy to get a silver as I am today! It’s been a crazy week, and that’s an understatement. We didn’t get our sleds until yesterday, so the two runs today were the first time we had used them in Winterberg.”

“I wanted to really attack this race. But the second run was not really that great. You have the option to really cut the corner on the way to the finish line – I decided to go for it because I knew it would be tight. However, I then cut off too much.”