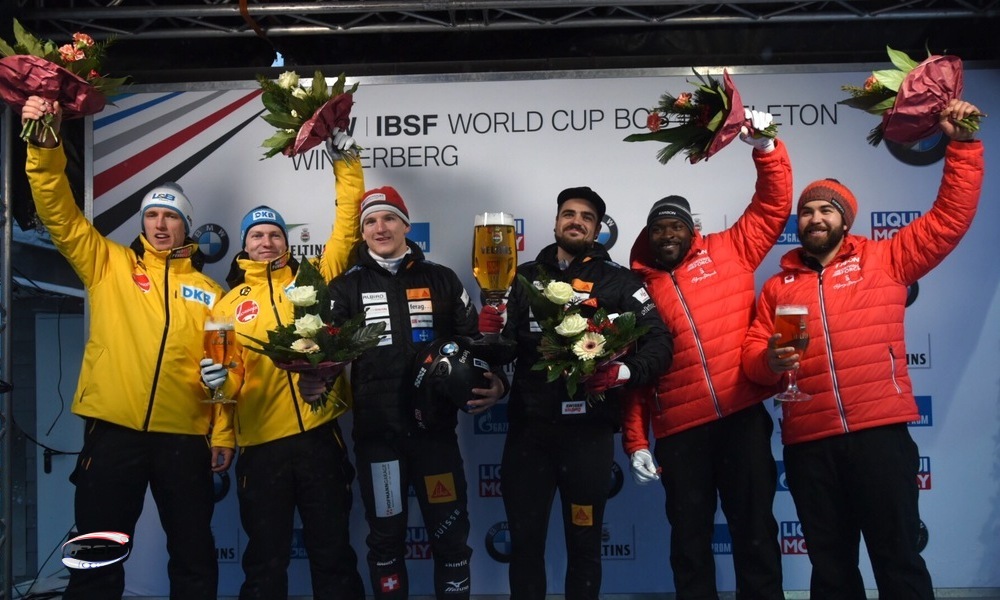 Winterberg (RWH): Bobsleigh pilot Clemens Bracher of Switzerland has secured a sensational victory in Winterberg. Making his début in the 2-man bobsleigh World Cup, the 30-year-old pilot and his brakeman Michael Kuonen won the fourth race in the 2017/2018 BMW IBSF World Cup.

Following the two runs in Winterberg, the Swiss pairing held a 0.21-second lead over the two teams tied in second, Chris Spring/Neville Wright of Canada and World Champion Francesco Friedrich with Thorsten Margis (GER). This marked Chris Spring’s third podium finish of the Olympic season and the first for Francesco Friedrich. After finishing sixth after the first run, the defending World Cup holder managed to climb up to the top three.

Nick Poloniato and Lascelles Brown of Canada, who surprised the field by taking the lead after the first run, fell back to fifth place in the second run.

In the overall standings for the 2017/2018 BMW IBSF World Cup, Justin Kripps (CAN, 804 points), who finished fourth in Winterberg, enters the second half of the season at the top of the rankings. After the fourth of eight races, Chris Spring (CAN, 787) is second ahead of Nico Walther (GER, 697), who finished ninth in Winterberg.

“We already knew that Winterberg suited us and we also did really well in the training. However, we really weren’t expecting to win here. This was of our first ever World Cup race in the 2-man bobsleigh.”

Chris Spring (CAN, sixth in the 2016 World Championships)

“We’re very happy today. This is my first ever medal on a European track. We lent our sled to Alysia Rissling for training, which meant it kept going back and forth, but we got through it as a team.”

“Naturally, the snow affected our start but it's an outdoor sport. Of course, we wanted to see what the new equipment was like, but it didn't really work out in the snow. It's really tricky now.”