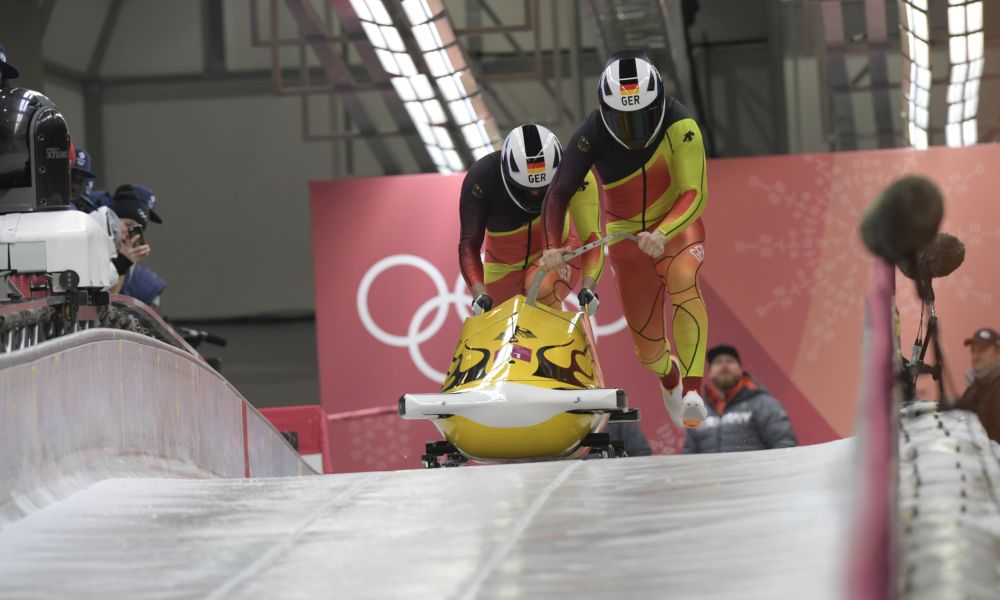 Nico Walther leads ahead of Justin Kripps and Johannes Lochner

PyeongChang (RWH): The PyeongChang Olympic Sliding Centre remains the backdrop for some thrilling action on the ice track. After two of the four Olympic heats in the 2-man bobsleigh, the race for gold, silver and bronze remains wide open.

Less than two tenths of a second separate the first three teams, while a further two tenths of a second separate first place from sixth place. Nico Walther/Christian Poser (GER) have the slight edge ahead of the final day, despite of a crash just ahead of the finish line. Justin Kripps/Alex Kopacz (CAN, 0.10 seconds back) are second ahead of Johannes Lochner/Christopher Weber (GER, 0.19 seconds back).

Oskars Melbardis, who was leading after the first round, fell back to fourth place. World Champion Francesco Friedrich with Thorsten Margis (GER, 0,29 seconds back) is fifth, followed by Oskars Kibermanis/Matiss Miknis (LAT, 0,39 seconds back).

Local heroes Yunjong Won/Joungwoo Seo claimed the fourth-best time on their second run to move up from ninth place. ©RWH2018

“We want two more good runs. If that's enough for a bronze in the end, it would be a huge success. We were trying to save a bit of time on the home curve, but I overdid it a bit. I went into slight shock when it happened. It's a funny feeling to make a mistake and then get told at the finish line that you’re leading with two tenths of a second.”

Justin Kripps (CAN, runner-up in the 2017 World Championships, overall winner in the 2018 World Cup)

“I like this track! It's really fun to ride! We had two pretty good runs, although not quite as good as I’d hoped. The track is even faster than in training and slightly more technical to drive.”

“We could be very happy with third place. From what we’ve seen today, the start is not that important here if you hit the track right.”

The Olympic Wintersport Federations mourn the death of the IOC Honorary President Dr. Jacques Rogge
7 May 2021