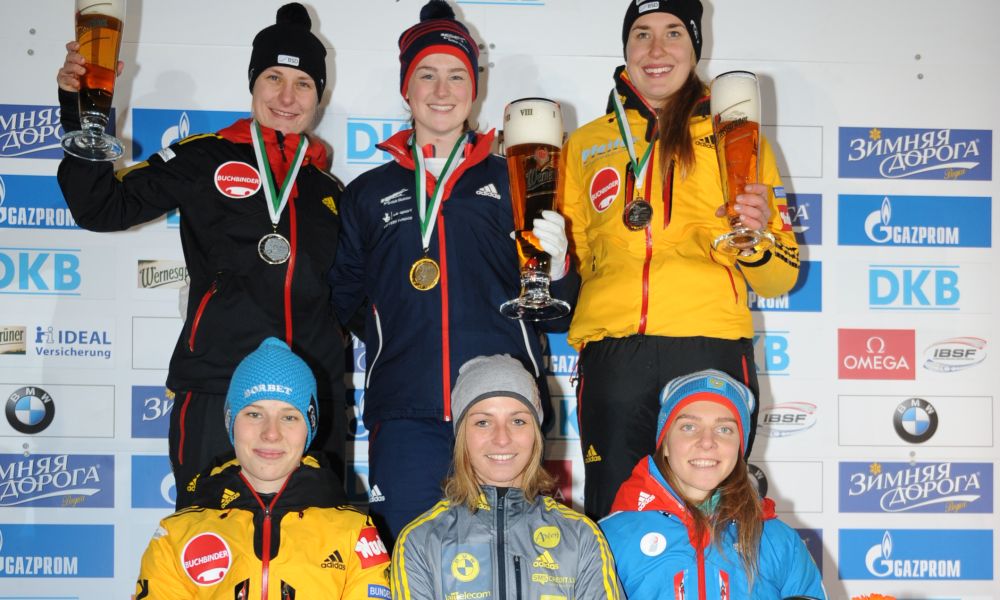 Altenberg (RWH): British skeleton racer Laura Deas has claimed the first World Cup victory of the 2015/2016 winter season. At the opening event of the BMW IBSF World Cup in Alternberg (GER), the athlete, who placed fifth overall in last year’s World Cup, secured her first win in the racing series with a total time of 1:57.84 minutes. Second place went to Tina Hermann from Germany, who was 0.04 seconds behind the British winner. Runner-up at the World Championships, Jacqueline Lölling (GER; 0.17 seconds behind) celebrated her World Cup début with her first podium, finishing third.

Celebrating their first time in a World Cup top ten were Lelde Priedulena of Latvia in fifth place and Yulia Kanakina of Russia in eighth. Kim Meylemans, the first Belgian skeleton pilot in the World Cup, took ninth place in her first race. Athletes from a total of seven countries were among the fastest women’s skeleton pilots at the BMW IBSF World Cup in Altenberg.

The results from Altenberg mean that the athletes are currently ranked in the same order in the overall World Cup standings: Laura Deas (GBR, 225 points) leads Tina Hermann (GER, 210) and Jacqueline Lölling (GER, 200).

Complete results lists showing all race times, overall times and the latest World Cup standings can be found at www.ibsf.org, via Twitter (@IBSFsliding), on the official IBSF page, and on the IBSF Facebook group.

What the racers say:

“I’m so happy. Altenberg is such a tough track and, of course, the home team is really strong here. Training went well but I never managed to get it together for one really good run so I just gave it everything during the race.”

“To be honest, I am not 100% happy. I had two relatively bad runs; I had problems in Omega in my second run in particular. But I can build on my result.”

“I am delighted. I started quicker during selections. I would have liked to have done that again today, but I think my excitement had spread to my legs.”