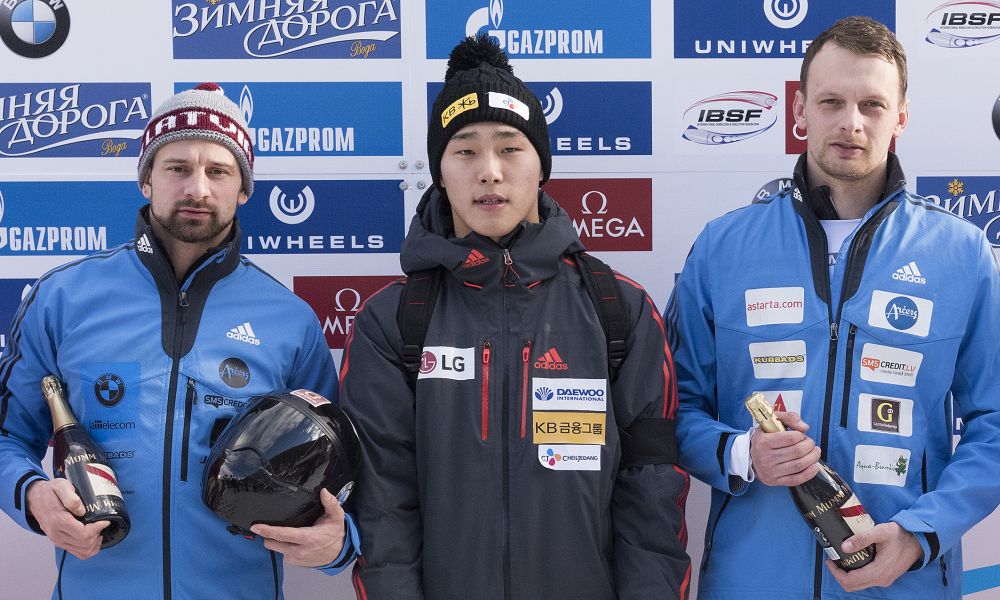 St Moritz (RWH) Skeleton slider Sungbin Yun is Korea’s first ever World Cup winner. At the BMW IBSF World Cup in St Moritz (SUI), the 21-year-old beat Martins and Tomass Dukurs of Latvia down to joint second (both 0.07 seconds behind).
The race in St Moritz also counted as the European Championships, and gold in this format went to the two Dukurs brothers. It was the seventh European Championship title in succession for younger brother Martins, while the older of the two, Tomass, celebrated his first win. Fourth place in the World Cup and bronze in the European Championships went to two-time Junior World Champion (2015 and 2016) Nikita Tregybov of Russia (0.59 seconds behind).
With just one race to go in the World Cup series, Martins Dukurs (LAT) is still in line for his seventh successive overall victory with 1560 points. Sungbin Yun (KOR) is overall second with 1365 points and Tomass Dukurs (LAT) is third with 1348. The final race in the BMW IBSF World Cup 2015/2016 rankings will be held in Königssee (GER) at the end of February after the BMW IBSF World Championships 2016.
Complete results lists showing all race times, overall times and the latest World Cup standings can be found at ibfs.org, via Twitter (@IBSFsliding), on the official IBSF page, and on the IBSF Facebook group. ©RWH2015-2016