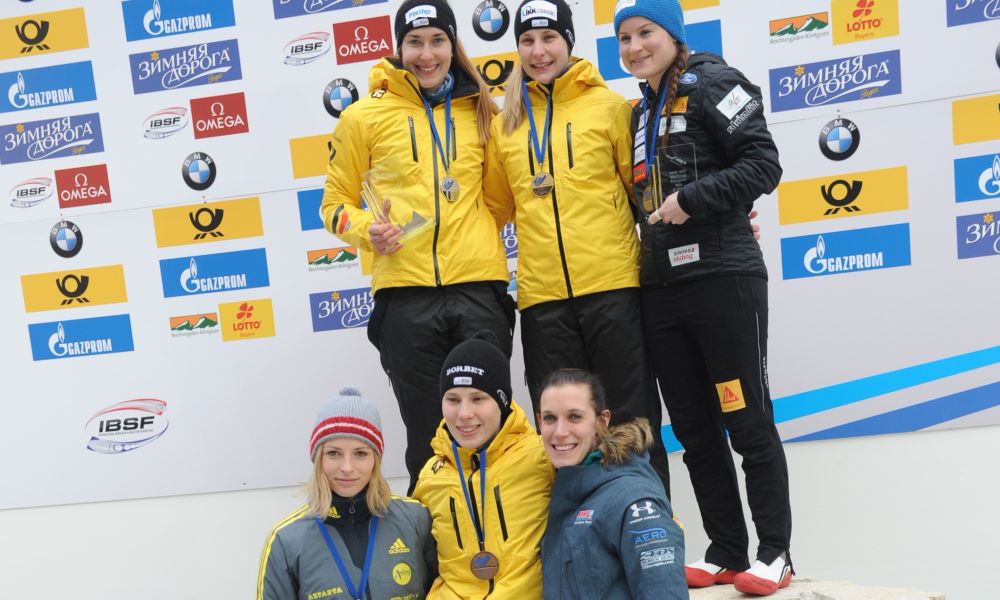 Jacqueline Lölling comes second in Königssee ahead of Marina Gilardoni

Königssee (RWH): Eight races, five wins and one overall World Cup victory: The skeleton World Champion Tina Hermann of Germany has achieved her first ever victory in the overall World Cup rankings at the final to the 2015/2016 BMW IBSF World Cup. Finishing 0.37 seconds faster, Hermann pushed her team mate Jacqueline Lölling (GER) into second place in Königssee (GER). Third place at the last World Cup race of the winter went to European Championship bronze medallist Marina Gilardoni of Switzerland (0.87 seconds behind), who defended her position with a one hundredth of a second lead over Junior World Champion Lelde Priedulena of Latvia.
The 15-year-old Youth Olympic Champion Ashleigh Pittaway of the UK, who was rewarded with her first ever World Cup start one week after winning a gold medal at the Winter Youth Olympic Games in Lillehammer (NOR), came in fifteenth.
In the overall rankings for the 2015/2016 BMW IBSF World Cup, the winner Tina Hermann (GER, 1737 points) was followed by Jacqueline Lölling (GER, 1550) in her first ever World Cup season. Jane Channell of Canada came in third overall (1410).
Complete results lists showing all race times, overall times and the latest World Cup standings can be found at www.ibsf.org, via Twitter (@IBSFsliding), on the official IBSF page, and on the IBSF Facebook group. ©RWH2015-2016

Tina Hermann (GER, 2016 World Champion, overall winner in the 2016 World Cup, overall bronze medallist at the 2014/2015 World Cup)
“Before the season started, I was hoping for my first World Cup victory. The fact that I got five wins and the overall victory, plus the World Championship title on top – that’s mad!”

Marina Gilardoni (SUI, bronze medallist at the 2016 European Championships, fourth place at the 2016 World Championships)
“It has been such a cool season for me! And then to end it with a third place finish. My favourite track is Lake Placid but Königssee isn’t bad for me either.”