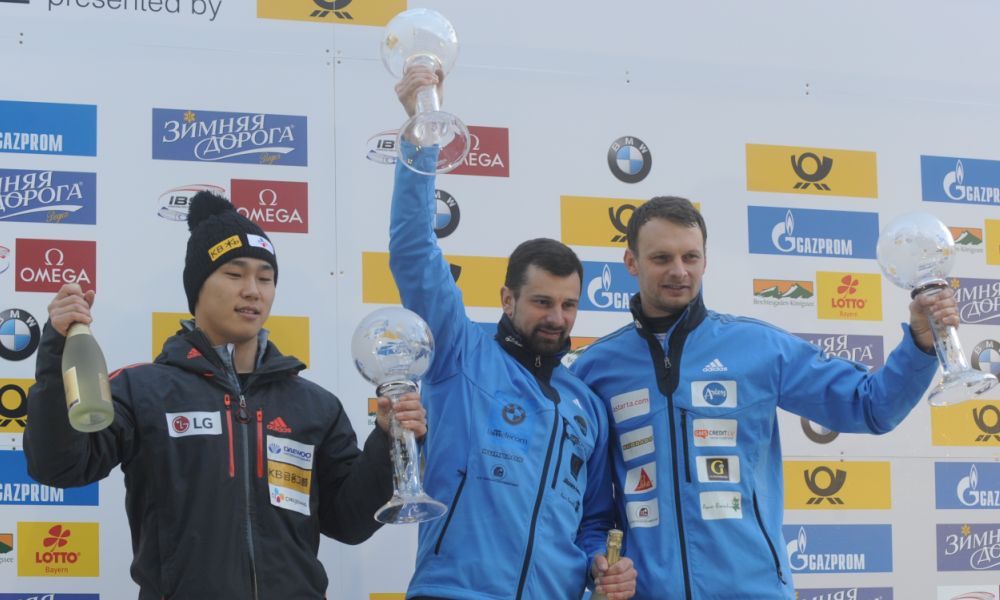 Sungbin Yun second ahead of Tomass Dukurs in Königssee final

Königssee (RWH) Skeleton slider Martins Dukurs has closed the 2015/2016 season with another win, giving him seven of the eight BMW IBSF World Cup races, and his seventh overall victory in succession. Dukurs, who also won the 2011, 2012, 2015 and 2016 World Championships, was 0.56 seconds faster than Sungbin Yun of Korea, who finished second in the final race of the series on the artificial track in Königssee (GER). Dukurs’ older brother Tomass (LAT) came third 0.74 seconds back.
Sungbin Yun was rewarded for his sixth consecutive podium finish with a second place in the overall rankings (1575 points) and the first ever trophy for Korea in the skeleton World Cup. The overall winner Martins Dukurs has a total of 1785 points, and third-placed Tomass Dukurs 1548 points.
Britain’s Dominic Parsons celebrated his best result of the season in the Königssee final with a fifth place.
23-year-old Raphael Maier of Austria finished eighth, closing his season, which included three BMW IBSF World Cups, with one of the best results of his career to date. Only in December 2014 in Lake Placid (USA) did he record a better World cup finish at sixth.
Complete results lists showing all race times, overall times and the latest World Cup standings can be found at www.ibsf.org, via Twitter (@IBSFsliding), on the official IBSF website, and on the IBSF Facebook group. ©RWH2015-2016

Martins Dukurs (LAT, silver in 2014 Olympics, World Champion in 2011, 2012, 2015 and 2016, European Champion from 2010 to 2016)
“This was an exceptional season for me. Thank you to everyone who helped make it happen, and to everyone who comes to the races to support the Latvian team. And probably the most exciting part of the season is still ahead of us: the first test runs on the Olympic track in PyeongChang in Korea.”

Sungbin Yun (KOR, overall second in 2016 World Cup)
“I’m speechless at the moment. Last season I was overall fifth, and now I’m second. This is the first ever World Cup trophy for a skeleton slider from an Asian country. I’m very happy.”