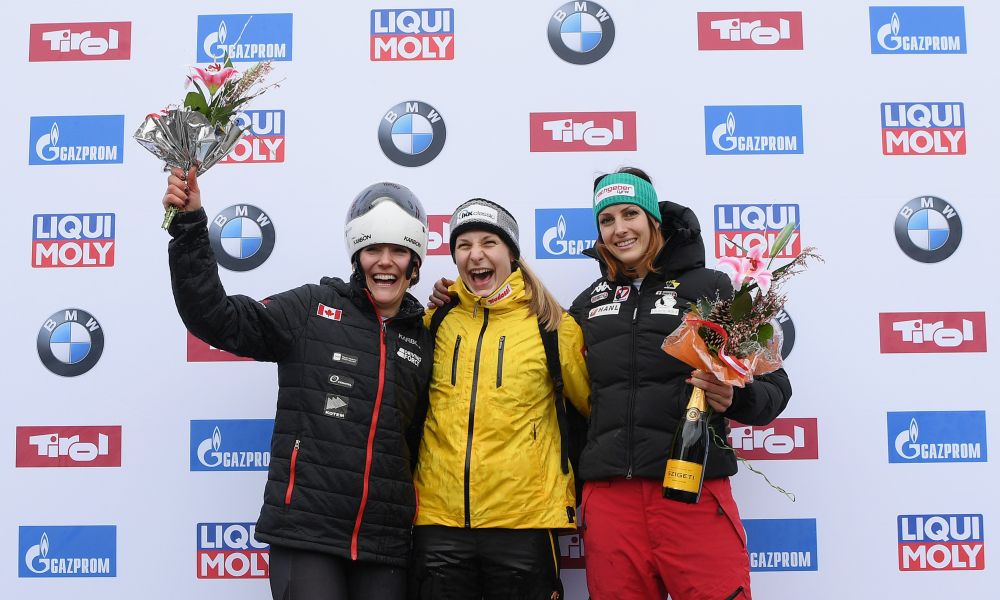 Mirela Rahneva finishes second in Innsbruck ahead of Janine Flock

Innsbruck (RWH): First victory of the season for the defending titleholder: Skeleton pilot Tina Hermann of Germany has won the BMW IBSF World Cup in Innsbruck-Igls (AUT), taking the top spot on the podium for the first time this winter. After securing the fastest time on her second run, the overall winner of last season’s World Cup pushed Canadian athlete Mirela Rahneva (0.16 seconds back) into second place. Third place in Innsbruck went to local hero Janine Flock (AUT, 0.24 seconds back), making it the fourth podium finish of the pre-Olympic season for the World Championship runner-up.

In fourth place (0.28 seconds behind), Russian pilot Elena Nikitina missed out on a place in the top three by just four hundredths of a second but still got to celebrate her best result in two years. The Olympic bronze medallist last finished third in Altenberg in January 2015.

Jane Channell of Canada also achieved her best result of the season in Innsbruck, where the overall bronze medallist in the 2016 World Cup finished in sixth.

Ahead of the World Cup final and Olympic trials in PyeongChang (KOR) in March (which will follow on from the BMW IBSF World Championships), Jacqueline Lölling (GER, 1366 points) continues to lead the overall standings in the BMW IBSF World Cup. However, her ninth-place finish in Innsbruck means that the gap between the runner-up from the 2016 World Championships and the athlete in second place has shrunk to 25 points. Following her first win of the season, World Champion Tina Hermann (GER, 1341 points) is now second overall ahead of Janine Flock (AUT, 1321). ©RWH2017