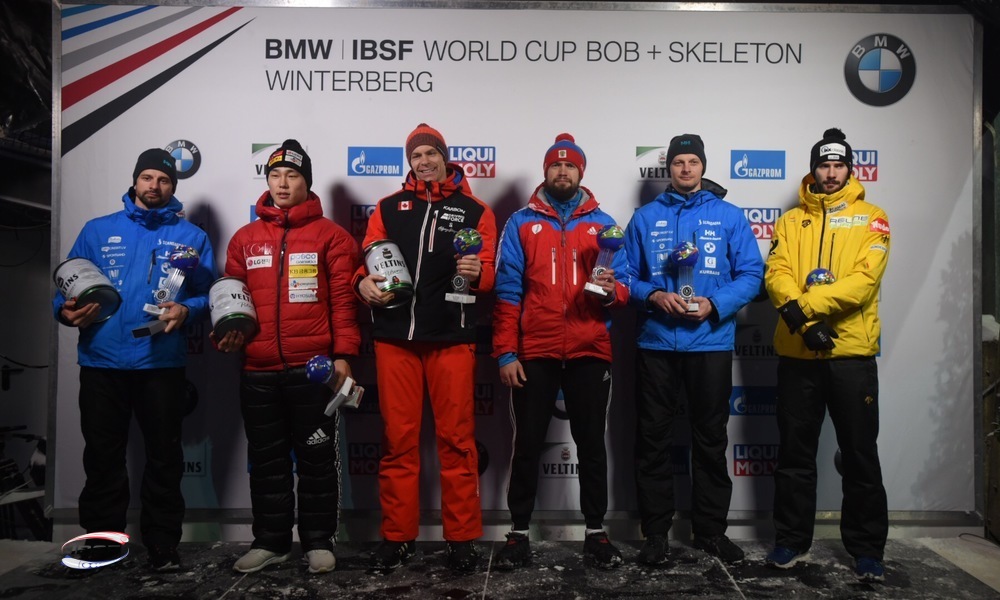 Winterberg (RWH): Heavy snowfall has led to the cancellation of the second run in the men's skeleton event at the BMW IBSF World Cup in Winterberg (GER). The results for the fourth race of the season will instead be based only on the first run.
Skeleton athlete Sungbin Yun of Korea thus remains the athlete to beat in this Olympic season’s BMW IBSF World Cup. The bronze medallist from the 2016 World Championships celebrated his third win in succession in Winterberg (GER).
Following the first and only run in Winterberg, Yun held a 0.06-second lead ahead of World Champion and defending World Cup holder Martins Dukurs of Latvia. Dave Greszczyszyn of Canada finished in a surprise third place. The athlete, who finished tenth in the 2017 World Championships, had previously secured his best result in January 2016 when he finished fifth in Whistler (CAN). At the race in Winterberg, however, he finished 0.26 seconds behind the winner Sungbin Yun to celebrate his first ever World Cup podium finish.
Vladislav Marchenkov of Russia also secured his best ever result, finishing eighth in Winterberg.
John Daly (USA, 10th place) celebrated the first top-ten finish of his comeback season in Winterberg.
Sungbin Yun (KOR, 885 points) continues to lead the overall standings at the halfway point of the 2017/2018 BMW IBSF World Cup season followed by Martins Dukurs (LAT, 821) and Tomass Dukurs (LAT, 752), who finished fifth in Winterberg.
For more detailed information including Results and the current IBSF Ranking please visit ibsf.org. ©RWH2017

Sungbin Yun (KOR, World Championships bronze 2016, runner-up in Overall World Cup 2016 and 2017)
„I really wanted this to happen and I also wanted the second heat. But race is race. It’s my first win here so I am very happy. Normally, the Germans are strong here.“

Martins Dukurs (LAT, five times World Champion, 2010-2017 European Champion and Overall World Cup winner)
„I would have loved to race the second heat, because I was not far behind Sungbin Yun. But the Jury decision was correct. I am quite happy with the first half of the season, even if there were more ups and downs than expected. In this season the focus is on the Olympis of course.“

Dave Greszczyszyn (CAN, WM-Zehnter 2017, Gesamtweltcup-Achter 2016)
„I know the Winterberg track and had some good results here in European Cup and Intercontinental Cup. I had a good start in first run and then tried to stay quiet and let the sled do its work. I cannot complain today.“

Altenberg, Innsbruck and Winterberg step in for Königssee
18 May 2021