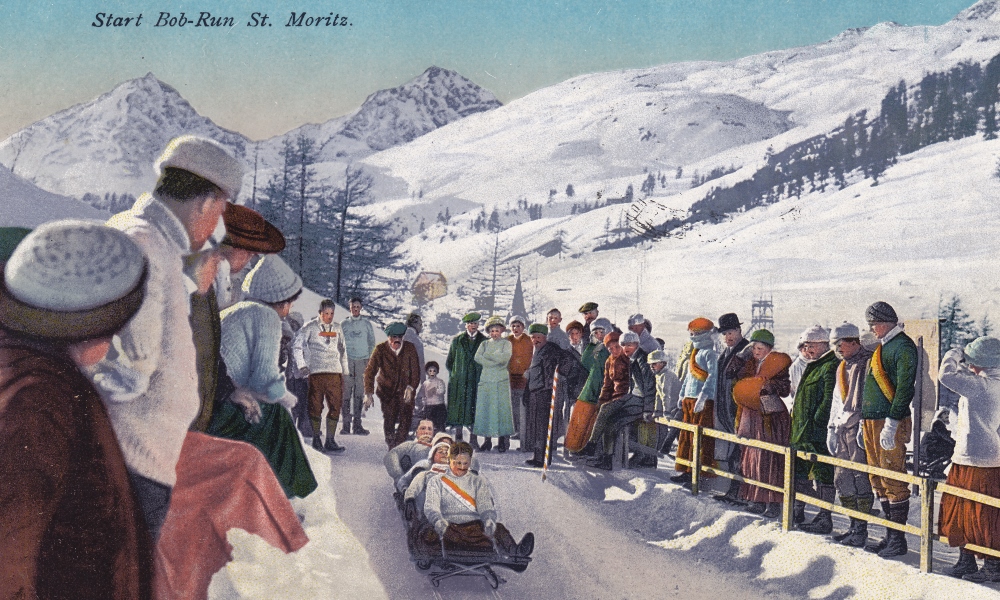 Although the sled has been around for centuries as a mode of transportation, the sport of bobsleigh didn't begin until the late 19th century when the Swiss attached a steering mechanism to a toboggan.

In 1897, the world's first bobsleigh club was founded in St. Moritz, Switzerland, spurring the growth of the sport in winter resorts throughout Europe. By 1914, bobsled races were taking place on a wide variety of natural ice courses.

The first racing sleds were made of wood but were soon replaced by steel sleds that came to be known as bobsleds, so named because of the way crews bobbed back and forth to increase their speed on the straightaways.

In 1923, the International Bobsleigh & Skeleton Federation (IBSF), originally Fédération internationale de bobsleigh et de tobogganing (FIBT) was founded and the following year a four-man race took place at the first ever Winter Olympics in Chamonix, France. A two-man event was added at the 1932 Olympics in Lake Placid, U.S.A., a format that has remained to the present.

Bobsled racing began largely as an activity for the rich and adventurous who gathered at alpine resorts for weekends of competition and partying.

There was no such thing as training. Competitors simply bought or rented a sled, started out as a rider and then took the wheel after a few runs.

By the 1950s, however, the sport as we know it today had begun to take shape. As the critical importance of the start was recognized, strong, fast athletes in other sports were drawn to bobsledding. Track and field competitors, handballers, gymnasts and others who could deliver a vigorous push at the start were much sought after.

In 1952, a critical rule change limiting the total weight of crew and sled ended the era of the super heavyweight bobsledder and sealed the future of the sport as an athletic contest of the highest caliber.

Until the advent of World Cup competition in the mid-1980s, bobsleigh success was determined solely by performance at the Olympics, World and European Championships. Since its inception, however, the World Cup series has added an exciting new dimension to the sport where versatility on different tracks and season-long consistency are rewarded.

Apart from the British influence in the sport's infancy, a strong U.S. presence from 1928 to 1956, and recent advances by other countries, bobsledding has been dominated largely by Europe's alpine nations over the years.

By far the most successful bobsledding nations have been Switzerland and Germany.

The Swiss have won more medals in Olympic, World and European championships and World Cup competitions than any other nation.

German Democratic Republic emerged as the sport's major power in the mid 1970s with its emphasis on sled design and construction. Since reunification, German bobsledders have remained a formidable group, winning numerous Olympic medals and World Championship titles since 1990.

Italy also has a long and successful track record in the sport, particularly from the mid 1950s to late 1960s, and Austria has had its shining moments.

In World Cup competition the Swiss and Germans have won the most medals, followed closely by Canadian teams.

From the small core of alpine nations who originally embraced bobsledding, the sport has since expanded around the world to include countries such as Jamaica, Chinese Taipei, Russia (USSR), Korea, Australia and New Zealand.

USSR became an affiliated member in 1980 and a Delegate of the Russian Federation attended the FIBT Congress held in Cortina d’Ampezzo, Italy, in 1981 for the first time.

At the same Cortina Congress it was decided that the Executive Committee can fix anti-doping controls at World Championships and European Championships, according to the IOC anti-doping rules.

Although the traditional bobsleigh powers remain strong, other nations have begun to show their strength. The 1998 Olympic Winter Games in Nagano, Japan, turned out to be festivals of firsts in bobsleigh. For the first time, two gold medals and two bronze medals were awarded at the Olympics; seven medals were won by teams from six different nations; eight nations finished among the Top Ten in both two-man and four-an events; more nations (25) competed in four-man races than in two-man (24) and 28 of the 50 affiliated members were represented. At the 1995 World Championship in Winterberg, no fewer than eight nations placed in the top ten in the four-man event while seven nations were represented in the top ten of the two-man competition.

Another stage in the evolution of the sport came in the early 1990s with the debut of women bobsledders at events in Europe and North America. In October, 1999, the International Olympic Committee added women’s bobsleigh, and men’s and women’s skeleton as full medal sports for the 2002 Olympic Winter Games in Salt Lake City, U.S.A.

The 1984 Congress, held in Calgary approved the proposed regulations having the objective to standardize the construction of the frame.

At the 2003 Congress held in Leipzig, Germany, a report about the runners, their costs, the possibility that they can be treated in order to increase their sliding on the ice, the difficulty and the high costs to control all runners before a competition, was submitted by the Sport Department.

The Congress decided to approve the proposal of the IBSF Executive Committee that all runners (both for bobsleds and skeleton sleds) have to be manufactured with a standard steel, delivered by the IBSF. Doing so, the cost of runners would not be expensive and their control would be reliable and it would be easier for material controllers to find out the treatment of runners with forbidden processes.

The sport continues to expand. Lake Placid, long a traditional site for bobsleigh competitions, built a challenging new combined track in 1999-2000. A new venue was added for the 2006 Olympic Winter games in Cesana, Italy, and a new facility was built for the 2010 Games in Vancouver/Whistler Canada. The Sliding Center ‘Sanki’ built in Sochi, Russia for XXII Olympic Winter Games successfully hosted the bobsleigh competitions in 2014. In winter of 2018, the sliding world will welcome a brand new track in PyeongChang, South Korea.