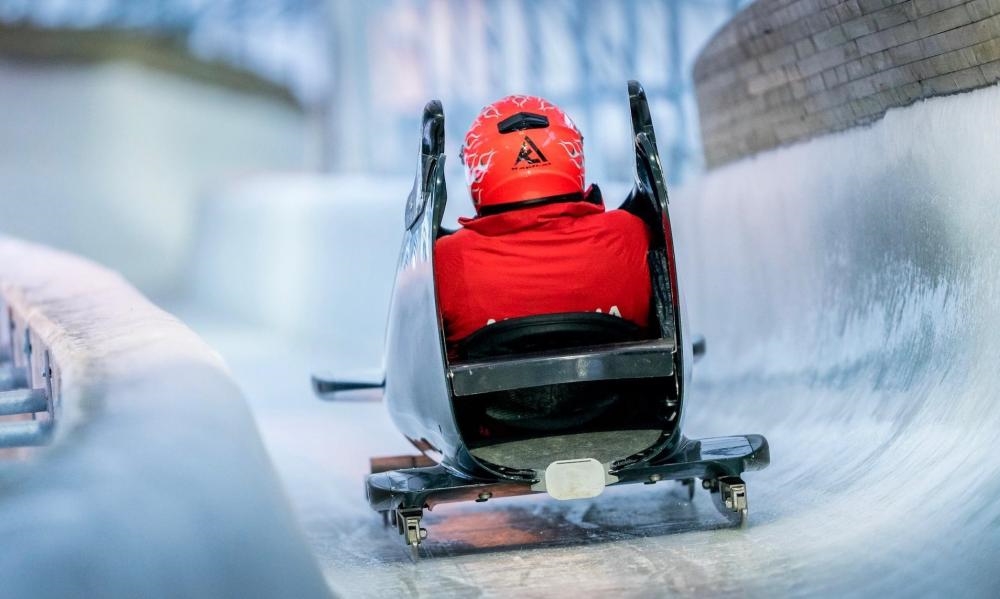 Athlete’s emotions, impressions and competition highlights can be found in the Para Sport section of our YouTube Channel.

For any questions regarding our Para Sport program please do not hesitate to contact our Para Coordinator This email address is being protected from spambots. You need JavaScript enabled to view it..

During the winter of 2002/2003 under the sponsorship of the Utah National Ability Center Aaron Lanningham (paraplegic – USA) and Gary Kuhl (BK leg amputee – USA) were the first two drivers to successfully drive bobsleighs from the top of the track in Park City Utah. Aaron started while seated in his sled and Gary pushed his sled and then loaded in as normal. Gary Kuhl subsequently got his IBSF pilot’s license and competed against able-bodied athletes in the 2006/2007 America Cup Race in Park City. Both Aaron and Gary competed in the same North American Cup Race the following season and in the Calgary North American Cup Race in 2007/2008. Thus began a series of activities leading us to where we are today. Since that time hundreds of descents have been successfully made by athletes with a wide range of disabilities on five different tracks.

In 2010 IBSF President Ivo Ferriani announced his full support of the Para Sport initiative and formed the IBSF Para Sport Committee. The Para Sport Committee was tasked with beginning the process of qualifying these sports for inclusion in the Paralympic Winter Games. The first formal international driving school for Para Bobsleigh and Para Skeleton was hosted by the USA Bobsled and Skeleton and financially supported by the IBSF during the 2011/2012 season. That school saw 17 athletes from 6 nations participate. Subsequent schools have been hosted by the IBSF in Park City, Calgary, Igls and Sigulda over the past several seasons.

St. Moritz, the birthplace of Bobsleigh and Skeleton, made a crucial contribution to the advancement of the sports with the introduction of the first custom designed Para Mono Bob, built by Renzo Podar under the sponsorship of Fritz Burkard. This equipment was first driven by Swiss Paralympic Gold Medalist Heinz Frei in January 2012. Para Mono Bob has since become the standard equipment for the sport of Para Bbobsleigh, and Fritz Burkard joined Heinz Frei in forming the International ParaSliding Club, St. Moritz.
The first recognized international competition for athletes with disability occurred in Sigulda, Latvia with the staging of the Prince Kropotkin Cup March 23, 2013. The Para Bobsleigh gold medal was won by Lauris Zutis of Latvia, while Matt Richardson of Great Britain took the gold medal in Para Skeleton.

In May 2014 the IBSF was officially granted the status of IPC Recognised International Federation for Para Bobsleigh and Para Skeleton with according rights and privileges. This designation indicated that Para Bobsleigh and Para Skeleton were recognized as candidate sports for inclusion in the Paralympic Winter Games in Beijing in 2022. The first official Para World Cup competitions were held during the 2014/2015 season in Park City, Igls and St. Moritz. During the 2015/2016 season Para World Cups were held in Park City, Calgary, Igls and St. Moritz, and in March 2016 the first ever Para Bobsleigh and Para Skeleton World Championship took place at the track in Park City, USA. 19 athletes from 9 nations took part in this inaugural event. The overall success of the Para World Championships was an important milestone for IBSF. In September 2016, the International Paralympic Committee (IPC) provisionally accepted the sport of Para Bobsleigh (seated) for inclusion in their winter sports programme for the 2022 Paralympic Winter Games in Beijing.

Para Bobsleigh uses specially designed monobobs which are owned and maintained by the IBSF. Para Skeleton uses standard skeleton sleds which comply with the specifications in the current IBSF International Rules for Skeleton.

At the recommendation of the International Paralympic Committee, the IBSF Para Sport Committee has limited its eligibility initially to only athletes with one or more of the first four types of impairments. Athletes are further evaluated by Classification experts to determine if they meet minimum and maximum disability criteria before being classified as eligible to participate in IBSF Para Sport events. The evaluation consists of a series of defined clinical tests and observations, but in lay terms it can be understood as follows:

Minimum disability is that level of impairment that places the athlete at a clear competitive disadvantage to their able-bodied counterparts in the sport. For example, amputation of a leg at the knee would qualify, but amputation of a single toe probably would not. Maximum disability is that level of impairment beyond which the athlete could no longer safely participate in these high-intensity sports because of their inability to control the sled or hold themselves on/in the sled or some other similar safety concern.